The Yowie: Australian for Unlikely
Stephano: "Drink, servant-monster, when I bid thee. Thy eyes are almost set in thy head."
Trinculo: "Where should they be set else? He were a brave monster indeed, if they were set in his tail."
~The Tempest, Act III Scene II 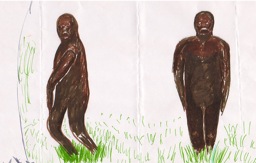 Hardly a week goes by without my being totally stultified by some new zoological discovery. A few weeks ago, researchers discovered a breeding ground for giant squid, which means that they’re about a million times more brave than I am. If I were in a submarine and I saw even a single giant squid, I would turn around and, in a word, flee. Especially if I were faced with a monstrosity recently mentioned on the BBC: a squid that emits a bright flash of light from its tentacles in order to confuse prey. Sadly, I have yet to hear any new news on an Australian creature known as the Yowie.

The Yowie is a creature not unlike our North-American Bigfoot: between five and eight feet tall, covered with long, dirty hair, and although many people who “spot” the creature first think it to be a monkey, it has distinctly, unmistakably human features. Calling it similar to the Bigfoot is somewhat an act of charity: it has more in common with the Puerto Rican Chupacabra. That’s sort of a negative thing: what I mean is that nobody can agree on what it looks like. Ranging from five to eight feet tall, it may or may not have glowing eyes of a range of colors; it has been reported with dark or light brown hair, between 3 and 5 fingers (or claws) on the hands and feet, it is sometimes described as peaceful, sometimes as extraordinarily violent, may or may not be associated with a horrible smell, so on and so forth. Not only that, but there are also reports of Yowies that are much shorter, around 3 feet, though the Aboriginal peoples of Australia insist that these are not just young Yowies, but rather a separate breed entirely that they call Jujudees.

Is it possible that such a creature exists? Australia has a lot of unexplored areas, in which plenty of nightmare creatures could conceal themselves. To answer this question, we have to draw a distinction: Between the regular, flesh-and-blood Yowie, and what we might as well call the psychic space Yowie.

Like the Chupacabra, no one can agree on the Yowie’s origins. Some claim that it is just a large, unpleasant animal, like the giant squid, that we’ve not yet discovered. Others, however, claim either that the Yowie is from outer space or that it has some sort of psychic ghost powers.

For instance, take the case of Sue O’Conner and her husband. In the Blue Mountains are of Australia they wake monthly from horrible, twisted dreams to a strange, “electric“ feeling in the air. Peeping in on them from the window is a creature with a tiny, human-like head atop broad, powerful shoulders. They estimate that it is 8 feet tall, to be able to see in that particular window. When I say that “they awake monthly”, I mean just that: the creature, and the terrible dreams, come around only during Sue’s period.
To be blunt, this is the sort of Yowie report in which I am unable to believe. We have no evidence, anywhere on the earth, that some sort of animal can control the dreams of human beings. The fact that it only comes around during menstrual cycles is further suspicious; no similar behavior can be seen on other, more down to earth creatures. And with the notable exception of the electric eel, no other animal creates any sort of “electric feel” in a room. Therefore, the reasoning goes, the Yowie must not be a creature of this earth; it is alternatively a space alien, a ghost, or some sort of psychic phenomenon, depending on who you talk to.
The only evidence that we have of this story is the word of two people, and I don’t trust eyewitness accounts farther than I can throw am elephant. Where are the photographs? The corroborating witnesses? The hair and poop and whatnot it must surely leave behind? Since it comes around like monthly clockwork, setting some sort of trap should hardly be a difficult exercise. So I ask you: in the face of no evidence other than someone’s story, what is more likely? That a psychic space ghost monster is peeping in on unsuspecting Aussie couples, or that they, intentionally or unintentionally, fabricated the story?

On the site of the Australian Yowie Research group, we find a tale of unparalleled madness. An Australian man claimed that, no matter where he goes, he is accosted by Yowies. On one occasion, a Yowie turned invisible and chased him off a cliff, for which he had to go to the hospital (though the creature was invisible, he and his girlfriend could see footprints appearing in the first as the creature approached them.) He took to wearing a helmet to bed so that Yowies could not assault him in his sleep, only to find that the helmet would be laying on the floor when he awoke. After wiring it on as he slept, the Yowies simply went into him through his shoulder. When trying to enter an area with high UFO/Yowie activity, his car was broadsided by that of another motorist, killing the other driver. When the man attempted to return to the site, the exact same accident occurred a second time. He now claims to be working on a perpetual motion machine.

This tale is utter madness. Yowies that attack him in the middle of the night? Perpetual motion machines? Invisible footprint-making monsters chasing him off a cliff? UFO-controlled auto accidents? To those who are attempting to find the Yowie, working on the theory that it is just a big ugly animal we’ve not seen before, I feel only pure, undiluted sympathy. This story is, at best, the ravings of a lunatic.

On the other hand, perhaps not all of the researchers deserve sympathy. The same site has an article written by a journalist who went out for a night with an experienced Yowie Hunter. They crept through the brush, hearing the sounds of Yowies yelling back and forth to each other, before they decided to change positions. Going down a different backwoods path, they were startled to see a Yowie with glowing red eyes step onto the path in front of them. The journalist writes that the creature was amazing, and we’ll have to take his word for it, because the pair had for some reason left their camera in the car.

Seems a bit on the convenient side, doesn’t it?

I mean, a man knows so much about Yowie activity that he can just pick an area, show up one evening, and not just hear a handful of them communicating, but actually see one at close range. As easy as spotting a guy in an Eagle’s jersey in Philadelphia. And yet, not a single photograph or sound recording has ever been made. At least there’s the occasional blurry shot of Bigfoot going through someone’s trash: the only thing that the Yowie has going for it is a handful of plaster casts of supposed footprints. (Footprints, for the record, are easier to forge than photographs.)

The Yowie researchers also have a bit of the anti-government paranoia that has infected the UFO community ever since the Air Force made it clear that they didn't want the Soviets to have any advantage over them. Unproven, unprovable claims, such as that young police officers do not report Yowie cases due to fear of ridicule, or that there is an active government cover-up of the phenomenon spatter otherwise sane-sounding monster hunting.

That’s the short version of the Yowie story. I’m not an expert on them. I can’t even find Australia on a map. But I hope that the Yowie enthusiast community won’t hold it against me to say that, although the existence of such a creature is theoretically possible, I don’t believe in it. The total lack of evidence, the lunacy of the UFO ghost psychic phantom gibberish with which your research is associated, and the questionably convenient reports of some of your colleagues are giant, bold, red strikes against you. 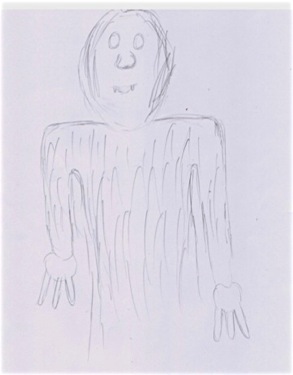