Last week I was berated by my cute neighbor for not being more stylishly attired. In a lot of ways, I agree with fashion preferences of a subset of the hipster crowd: I like plaid shirts, and those western-style shirts with snaps instead of buttons, and big bushy beards, and thick-rimmed glasses. The difference is that I like these things because I think they’re awesome. Hipsters like these things because they think they’re stupid. They dress ‘ironically’. Essentially, hipsters think I’m stupid. So I’m constantly on guard about what I wear, constantly keeping in mind that if a hipster likes something, I can’t wear it, because if I wanted to associate with people that think I’m an idiot, I’d hang out with my family more often.

Yet today I’ve come across an accessory that I shall make a part of my wardrobe no matter how many Newport smoking, finger-moustache-tattoo-having, brakeless bicycle riding ding dongs begin sporting them: the Thought Screen Helmet, as available at stopabductions.com.

Remember when the movie Signs came out? And how it was scary as hell until M. Night Shyamalan gave Hitchcock the finger and actually showed the monster we were all so terrified of? When I went to see that movie, everyone in the movie theatre was wearing tin foil helmets to promote it (on account of a scene where everyone is crowded in a basement, wearing tin foil hats). The Thought Screen Helmet is the same exact thing, but with fancier materials. In fact, according to the ‘development’ section, early models were aluminum-foil based, but an investigator in Iowa reported one user trying them with no results. And then “…the investigator could not be reached and the whereabouts of the helmets are unknown.” DUHN DUHN DUHNNNNNNNN!

The website shows you how to build a Thought Screen Helmet all on your own. You essentially take a hat and stuff it with 8 layers of ‘velostat’, a material produced by 3M that is used for EMF shielding applications. Velostat is a plastic sheet impregnated with carbon, which raises the permeability of… you know what? Never mind. Suffice it to say that velostat is just a material that electromagnetic waves have a real hard time getting through.

Now why, I hear you cry, would you need a Thought Screen Helmet? Well, space aliens have enormous brains, which give them the gift of psychic powers, with which they can paralyze, control, and probe the rectums out of people. The EMF shielding afforded by this helmet prevents the alien mind control powers from working, and if their mind control powers aren’t going to work, they just don’t bother showing up any more. If you have a problem with aliens abducting you, just sleep in a Thought Screen Helmet and you’ll be as safe as a turkey buzzard. The inventor seems to have been inspired by comics from way back in the day. I’m certainly not going to make any comment on that. I mean… there’s nothing wrong with a guy making an outfit inspired from comics… or videogames… right? 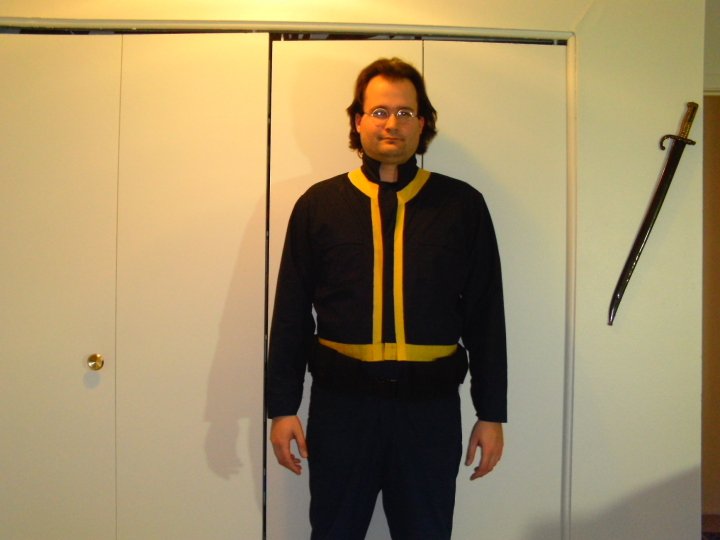 It's a Vault Jumpsuit, you philistines.

Normally, this is where I would devolve into pure mockery, perhaps saying something about velostat helmets clearly having an effect on brain waves. But the site is so damn earnest. The inventor, a kindly looking older gentleman who would look like a normal guy if not for his crazy hat, makes it clear he has no interest in making a profit from his site. He’s just trying to help you. He includes instructions, part numbers for the materials you’ll need, and helpful hints. I get the impression he really thinks he’s doing you a service by keeping this site running.

And then I clicked on the link to a list of ‘alien weaknesses’. Here is the second tidbit of information that is offered, verbatim:

“One woman who now wears a thought screen helmet along with her husband reports that she killed four alien-hybrid fetuses in a row by taking a gram of vitamin C every hour for weeks. She used her alarm clock at night to awaken her. She reported that she could no longer feel the fetuses moving and the aliens were very angry at the deaths of the alien-hybrids they implanted in her. The aliens did remove a dead alien-hybrid fetus before implanting a live one at another time. This was before she started wearing a thought screen helmet.”

First of all: Don’t take nutritional advice from a guy who sleeps in a tinfoil helmet to keep aliens out of his brain. Second of all, if you’re going to get rid of a fetus, do it with a doctor. I’m not here to debate the morality or immorality of abortion. I’m just going to note that it’s probably legal where you live, so if you want to get rid of a fetus because it’s an alien/human abomination, do it in a responsible way. Also… I hate to mention this, but it’s possible to overdose on Vitamin C. I know the clerk at the GNC pill counter told you otherwise, but if you take too much, you can look forward to nausea, diarrhea, bloating, mouth ulcers, kidney stones, and deficiencies of copper and vitamin B-12. Take too much for too long, and kiss your kidneys and ability to produce insulin goodbye. So let me amend my previous statement: don’t take nutritional advice from a guy who sleeps in an anti-alien helmet, but also don’t take nutritional advice from that guy with the bloodshot eyes and ass-length hair at the Whole Foods.

The idea that overdosing on vitamins can murder an alien/human abomination baby is based on the works of Professor David Jacobs. You may recall that I interviewed Dr. Jacobs once, years ago. I went in to his office a diehard skeptic. I don’t know if it was the voice, the intense eyes, or that handsome moustache, but I left his office two hours later convinced that every person I passed on the street was an alien/human hybrid plotting to install space lizards in our government. The guy is hypnotic. Anyway. Dr. Jacobs wrote a number of books, where he claimed that a) aliens absorb nutrients through their skin while floating in tanks of delicious broth, and b) they are implanting abductees with human/alien hybrid monsters that will someday take over the world. A large portion of the rest of the website is devoted to expanding on Jacobs’ ideas (wearing strong perfume will deter aliens, because that stank touching their skin is the equivalent of that stank touching the inside of their brains). This seems odd to me. I mean… human beings can keep themselves alive on the ocean floor, the moon, or inside volcanoes with the aid of fancy outfits. The space aliens can’t make an overcoat that will keep perfume off of them? They seemed so smart just a little while ago.

But let’s get back to the Thought Screen Helmet. Let’s just say for a moment that there really are psychic flying space monsters, and that they can use their powers to control you. Let’s say that velostat can stop these mind powers by shielding the electromagnetic waves coming out of your brain. Look at this picture, taken from stopabductions.com: 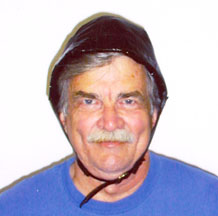 Anyway, there are more than just simple logic reasons that this helmet won’t work. The site reports that aliens, frustrated with their inability to psychically control their human prey, have started showing up with burly bodyguards, who control humans the old fashioned way: punching them in the damn face.

It seems to me that the only surefire way to avoid alien abduction is to wear a thought screen helmet, but keep a shotgun handy, and ensure that you fill yourself with bourbon before bed, so that your very breath will be an excellent weapon.

But… that’s just my opinion. It might be a little crazy.

Author's Addendum: On a return visit to stopabductions.com, I noticed this image as a user testimonial: 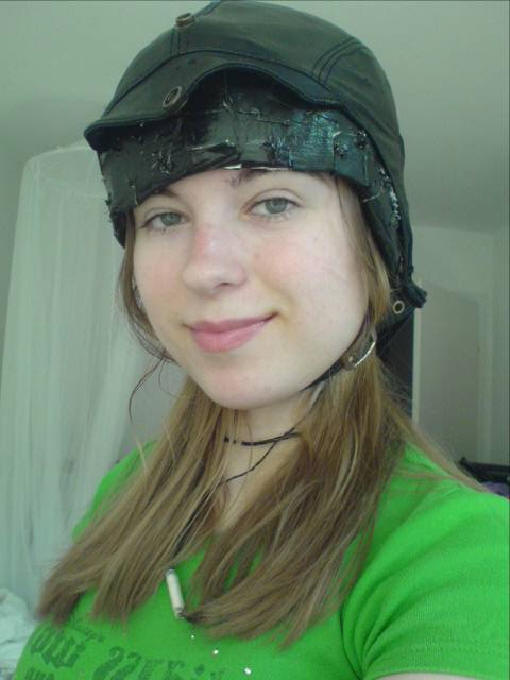 Allow me to be the first to say: Why hello there. How you doin? The smirk makes hope that perhaps she doesn't believe wholeheartedly in the spacehat's efficacy, but the eyes make me want to start my own line of space-monster repllant headwear.