A Delicious Tale of Gentler Times 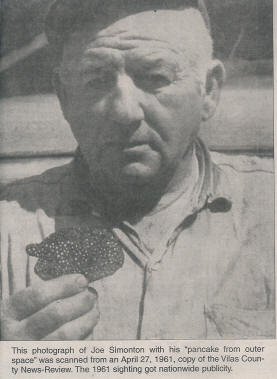 Space pancakes, unlikely to appear at a store near you!

As an expatriate living in a strange and foreign land, I miss certain kinds of food more than pretty much anything (or anyone) else. For instance, I would do basically anything for a big plate of Buffalo wings right now. Anything. On another note, I read stories about UFOs to circumvent homesickness: when you’re reading stories about flying space monsters from beyond the moon, things feel just like home. Little did I know that these space hooligan stories and my longing for good food would collide in a most hilarious way.

Meet Paul (Joe) Simonton. He was a full time chicken farmer, part time auctioneer, and yearly Santa Claus living in Wisconsin in 1961. On the morning of April 18 he was preparing a light breakfast, surely some sort of regional delicacy, but it wasn’t to be: he was going to be dining on more interplanetary fare. Hearing a jet engine winding down, which sounded sort of like "tires on pavement", he went out into his yard to see a flying saucer hovering just above his yard. The thing was brighter than chrome, didn’t touch the ground, was perhaps 30 feet in diameter and 12 feet tall, and had a depressed ring going around the center. This ring had a number of pipes about six inches in diameter sticking out of it. One might think that a flying saucer landing in your yard was quite enough for one day, but trust me: this story gets better.

A hatch opened on the upper part of the craft and Simonton came face to face with a number of creatures, quite possibly from outer space. To Simonton, however, they looked like Italians because they had dark hair and complexions. This suspicion could have been confirmed had a blonde woman been nearby, but I digress. Simonton was alone. The three men were about five feet tall, 125 pounds in weight, and perhaps 25-30 years in age. They were wearing blue or black jumpsuits with the kinds of knit caps that are “worn under crash helmets.”

The man at the hatch, who I am going to name Guido for the purposes of this article, held up a shiny metal pitcher that seemed to be made of the same material as the outside of the spaceship. Using advanced, space-man pantomimes, Guido implied that he wanted some water, which Simonton fetched from a nearby pump. When handing the refreshing drink back to the space-Italian, Simonton got a good look at the inside of the ship.

The cabin was made of a material that was basically the opposite of the exterior of the ship, a dark black substance that made Simonton think of wrought iron. Surprised at the contrast between the inside and the outside, he later mentioned that it might make a cool design for a bedroom.

There were three “extremely beautiful” instrument panels made of the same material. It’s a shame that he never described the panels in more detail: as this occurred in 1961, I suspect he’d say that they were covered in dials, knobs, and pushbuttons, things that back them seemed to be cutting-edge technology, but nowadays seems outdated and hokey. Think that’s speculation? Look at other cases from the 1960s: the interiors of space ships didn’t look anything like they do today.

Anyway, one of the men was working at the instrument panel, while another was working at, of all things, a flameless cooking surface. This man, who I shall henceforth refer to as Luigi, had red stripes down the sides of his outfit. Noticing that Luigi seemed to be cooking up some breakfast, Simonton pointed at a stack of round pancake-like objects next to the space griddle and then to his mouth. Luigi, understanding the international language of Hungry, gave Simonton four of the “pancakes” and touched his forehead in salute. The things were about three or four inches in diameter and covered in little holes. Simonton saluted back, and then the hatch closed and the space Fiat blasted off into the sky, creating a hot blast of air.

Simonton ate one of the “pancakes” and stated that it tasted like cardboard.

I feel as though this is the point where I should make some sort of witty pancake pun. I think I will just skip this step, however, I would like to point out that there’s another article on this case titled “The Interrupted Breakfast.” Best. Name. Ever. Absolute, pure undiluted genius.

Anyway, the police came on out to Simonton’s house. Aside from the pancakes, they were able to find no corroborating evidence that space aliens had been out and about that day. They did note, of course, that Simonton was a very believable person, and seemed genuinely convinced space monsters from beyond the moon had brought him some take-out that fateful morning.

Since he had three of the pancakes left, Simonton kept one and gave the other two to a government lab and a UFO investigation organization. The government analysis came back as pretty much everyone would expect: the pancakes were made of grease, flour, and water. But this is where the story takes a weird skip into conspiracy theorist territory: rumors began circulating that either a) the flour was of an unknown type or b) the government covered-up the fact that the pancakes were 100% protein free. The latter is simply a rumor; the former is semi-true in that while the Air Force didn’t bother figuring out specifically what kind of flour was used, they certainly never came to the conclusion that the flour was anything other than normal earth-man flour.

The conspiracy theories continue to pour out. Some speculate that, since pancakes are occasionally mentioned in the Bible, the space aliens were showing that flying saucers are, in fact, manifestations from the spiritual world. Plus, if you do some numerology with the date of the sighting, the numbers… spell out PANCAKE! Just kidding. But numerology is used to support this theory. This seems sort of crazy to me. Space aliens are really angels, but they don’t speak any human language? And they need water? And to make their presence known on earth, they choose a rural chicken farmer? Maybe I’m just too logical a guy, but if UFOs wanted to let people know they were Biblical entities, there’s got to be a better way to do it. In fact, saying the name “Jesus” and then giving a thumb-up sign would suffice.

There are a few things about the case itself that, to me, don’t seem to make sense. First of all: space aliens can conquer the non-trivial problems of space flight, but they don’t remember to pack enough water for the trip? The obvious response is that they specifically wanted Earth water, perhaps to analyze scientifically much the way we did to their pancakes. This would be in line with the popular 1960s notion that space aliens were disinterested researchers here to observe and/or scout out the earth. Today their motives are much more sinister, what with the breeding program and the chopping up cattle and all. Their main weapon is secrecy.

Bearing in mind that the aliens would probably want to keep their presence here on earth quiet, doesn’t it seem like there are better ways to get earth water? They could have just snuck in at night and gotten it themselves, rather than doing it in broad daylight.

One question that I had when reading about it can never be answered: when the analyses concluded that the space pancakes were, in fact, rather human pancakes, did anyone check Simonton’s house for similar ingredients? It certainly wouldn’t have been conclusive proof this is a hoax, but it would have been interesting.

The “official” explanation was that Simonton, while cooking breakfast, had some sort of weird waking dream that he combined with reality. So while the incident didn’t literally happen, he’s off the hook as far as perpetrating a flat-out hoax. A number of psychologists have concurred with this opinion, although the hardcore UFO enthusiasts out there on the internet think this explanation was just to save face for the Air Force.

One investigator said that they were sure this was not a hoax, as Simonton had no obvious way to profit from it. Raymond Palmer, all around kook of Shaver Hoax fame, contacted the Air Force and said that Simonton’s story was a ploy to get media attention for a planned mini-Disneyland that was going to open. That’s right. A mini-Disneyland in Wisconsin. Sure.

The point is, Plamer was a kook. But just because he was wrong doesn’t mean there are other explanations for the story. For instance, Simonton later complained that all the reporters bothering him were keeping him from getting work done on the farm. Despite this, he went to numerous UFO conventions in Canada and the Northern US, where he later claimed that he had had more contact with the space Italians, but he didn’t tell anyone because the media had hurt his feelings with the way they covered the first case.

Anyway, for a guy that was irritated that the media was keeping him away from work on the farm, it seems strange that he would then take time out of his busy schedule to go to UFO conventions. And that’s what a lot of people forget: profit doesn’t automatically mean money. Perhaps things on the farm were boring and Simonton wanted to spice up his life. Perhaps he just wanted some attention. Just because there’s no clear cash income from the tale, that doesn’t mean it’s 100% true.

From today’s point of view, as was previously mentioned, this story is hokey as all get out. Today, we expect sleek, silent machines filled with lightbulb-headed naked nightmare monsters. Simonton’s spaceship must have looked very futuristic in the 1960s, but what with the exhaust tubes and the jet engine sound, today it looks flat-out goofy. And the spaceship was filled with Italians? Where are the giant reptiles? The hideous gray ooglie booglies? And how do their actions fit in with today’s image of space monsters as flying genital-ruiners?

For me, the Simonton tale is a relic of a nicer age of space monsters. Like Bucky Nelson and Truman Bethurum, these aliens just sort of fly around handing out food and enjoying themselves. These days, they spend their time chopping up cattle and probing butts. They certainly don’t swap space delicacies. So just like with Bucky Nelson, let me say: I really don’t think this story is true, but I sure do wish it was.