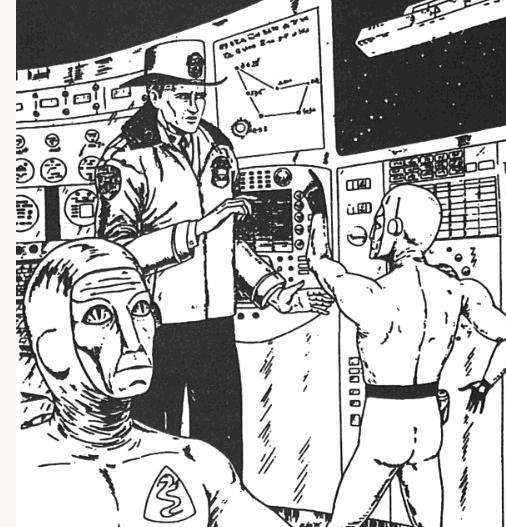 It recently occurred to me that policemen are perhaps over-represented when it comes to being abducted by space monsters from beyond the moon. Officer Jeff Greenhaw saw a hilarious tin-foil monster in 1973 that cost him his job; Officer Lonnie Zamora saw a spaceship hanging around a dynamite shack in 1964; and a Military Policeman named Kevin Conde accidentally created the “British Roswell” while screwing around in his 1973 Plymouth Volare one night. Let us welcome another member to this strange law-enforcement sub-community: Officer Herb Shirmer.

In 1967, he was a mere 22 years old and a police officer in the town of Ashland, Nebraska. At about 2:30 a.m. on December 3rd, he saw a UFO, earning him fame forever and starting him on the same path towards unemployment and ruin that had had its way with Officer Greenhaw.

Shirmer was on patrol when he saw lights beside a road. As he watched, a football-shaped object rose and flew away. It seemed like a fairly straightforward sighting, and when he returned to the station at around 3 a.m., he wrote “Saw a flying saucer at the junction of highways 6 and 63. Believe it or not!" in the log. Then he went home.

Shirmer's sketch of the flying saucer

But all was not right with Officer Shirmer. He had a blinding headache and there was a mark on his neck. The Condon Committee (a research project from the University of Colorado, funded by the Air Force) seems to have heard of him, and took him to be hypnotized sometime in 1968. Under hypnosis, he told an astonishing tale: astonishing mostly because in retrospect it is the hokiest thing a person could have concocted.

Shirmer recalled under hypnosis that the UFO began to float away, but then a gangplank descended and two man-shaped creatures appeared. One sprayed some sort of green gas out of a box, which enveloped the patrol car. The other monster came over to the driver’s side door. For some reason he could not understand, Shirmer could not draw his pistol, but rather rolled the window down to have a pleasant chat. The creature reached in and stuck a metal object against Shirmer’s neck, after which they could communicate with ease.

The creature, which I feel the urge to name Captain Goofball (due to his appearance; see below) then asked a couple of questions, blurting them out in the constipated style of a good drive-in horror flick. First he demanded to know “Would you shoot at a space-ship?” and then “Are you the Watchman of this place?” When Shirmer said no to the first and yes to the second, the creature vomited up, “come with me, Watchman.”

Before we see the hilarious wonders of the interior of the space ship, we should take a look at the creatures themselves. About four feet tall, they had cat’s eyes with sharp, vertical pupils, and gray skin. They were also wearing that incredible symbol of the future: tight-fitting unitards. Theirs were silvery-gray in colour and were well matched with gloves, boots, and tight-fitting cloth helmets that had a single antenna over the left ear. Over the heart was a patch with some sort of winged serpent on it; whereas some UFO enthusiasts would be drawn to compare these outfits with those in the Betty Anfreasson abduction case, I feel more drawn to compare them to the guys that hand me my 64 oz. soda each morning. Shirmer was abducted by space-alien drive through workers. 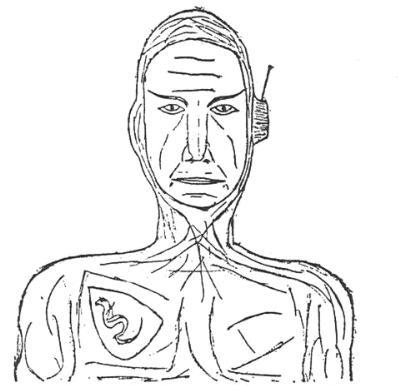 Shirmer's sketch. If this guy can hear me, I'd like a Double Whopper without tomatoes.

Inside the ship, The Leader, like some sort of Special Olympics Bond villain, took Shirmer on a tour of the ship and explained his evil plans. He showed Shirmer how the ship was powered through “Reversible Electromagnetism;” they watched as the ship siphoned energy out of a power line using a blue beam of lightning. Apparently, one of the reasons spaceships land on earth is to steal our electricity. The creature claimed they’ve been here for a “very, very long time,” which raises the question: what did they do before we had power lines?

Anyway, The Leader then explained that human beings were abducted at random so as to not show too much of a pattern and keep earth people confused. Allow me my best Peter Sellers impression, but wouldn’t one of the most important parts of a huge program designed to keep people confused be to NOT EXPLAIN IT TO PEOPLE? Seriously. Is there something I’m missing? The leader claims confusion is an important part of their strategy, and then explains that strategy, so as to ensure Shirmer is not confused? Let me state, without equivocation, that if this story is true, we have nothing to fear from spacemen, because they’re a bunch of damned idiots.

I’m going to digress. Spacemen are routinely taking people on tours of their ships and showing them how they work. The aliens in this case seem to have abducted Shirmer for no reason other than to show off their vehicle. They even showed him a smaller craft that was used for covert “surveillance.” While showing him all of this, they explain their plan to him, referring to it as a “breeding analysis program,” and pinpoint their homeworld, in a “Galaxy next to [ours].” Why in the hell would you do this? UFO enthusiasts claim that space monsters from beyond the stars want to spread confusion. But you know what? Claiming that space monsters tell people they have a plan to create confusion in order to create confusion is one level of abstraction too many. That card’s been played, this train of logic is stupid, and that anyone could seriously believe something so asinine and illogical absolutely baffles me.

UFO enthusiasts want to make it look like they are a persecuted people, and that there are probably millions of people that have been abducted by space monsters from beyond the moon who are scared to tell their tale. For his part, Shirmer claims people cut his tires, smashed his windshield, and would laugh and rip up traffic tickets that he wrote them. "What could I do?" He asked. Now, I don't advocate harassing people like that. Verbal abuse is one thing, but property damage crosses a line. On the other hand, if you're the sort of law enforcement official that lets civillians disrespect you like that, maybe your heart is too big for that line of work. What could he have done? Write the guy a replacement ticket, then a ticket for ripping up the ticket, and if he gives you any trouble, haul his ass to the lock-up. Instead, Shirmer got promoted to cheif and quit shortly thereafter, claiming that his UFO encounter was constantly in his mind and he couldn't concentrate on his work.

For reasons certainly unknown to me, UFO enthusiasts consider this case a “major case” or one of the “classic cases.” But what do we really have?
We have a single witness to an event, who regained his memories only months later and during intense hypnosis sessions. No one else reported even so little as “lights in the sky” that night. We have no physical proof that this event occurred. Shirmer didn’t even take photographs of the “big red welt” under his ear where the creature had applied his metal thingumbob.

We have a space alien that looks like a reject from a comic book: that radio antenna sticking out of the ear may have looked futuristic back in the 1960s, but today it looks just plain ridiculous. Shirmer’s Leader even made it into an article by Martin Kottmeyer about how space aliens in “real life” look a lot like space aliens from bad films. In this case, The Leader looks identical to the Martians in the move Mars Needs Women, complete with radio antenna over the ear. The dialogue Shirmer recollects certainly sounds like something out of the vault of B-Movies.

Comparison of the sketch and villain from Mars Needs Women, after Kottmeyer

We have some sci-fi mumbo jumbo about reverse electromagnetism that sounds suspiciously like the kind found in Cotactee literature; like the ear-radios, it may have seemed futuristic and technical in the 1960s, but now it seems hokey and dated.

I’m not going to claim to know what happened that night on that dark, rural road. What I am going to claim is that this entire case rests on the word of a single individual. The UFO enthusiasts claim Shirmer to have been a reliable, responsible young man, but in a world where senators get arrested in filthy airport restrooms for openly soliciting man-on-man public sex, I’m not the sort of person that is going to automatically equate “position of authority” with “being responsible.”

There’s no proof that any of the things Shirmer claims occurred actually occurred. The things he claimed occurred are ridiculous, illogical, and in retrospect, extraordinarily dated and hokey, though they may have sounded good at the time. The fact that this is considered a “major” or “classic” says more about the UFO enthusiast community than it does about the merits of the case.