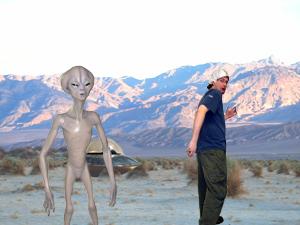 Friends, each week I write here about why one should not believe in UFOs, space monsters, psychics, and other paranormal mumbo-jumbo. I've done it with quite a bit of bitter, bitter, humor, a dash of slander, and, on occasion, vulgarity. But today I must concede defeat, for I have come a cross a tale so incredibly reliable that I cannot find any angle from which to try to discredit it: The tale of Albert Seil.

In 1990 Albert was a high school student in Toronto. While walking home one night along a dark, deserted forest path he saw a great light, glowing in all the many colors of the rainbow, fly overhead and land in a field. Curious, Albert approached the craft and saw tiny, gray aliens with heads the shape of lightbulbs, messing around with the wheat in the field. They saw him, however, and suddenly a bright light shot out of the craft and he floated, paralyzed, into the craft. There he was inspected by the aliens, who preformed strange and advanced medical procedures on him. On a gurney next to him sat half of a cow, upon which the aliens were experimenting, and he got the feeling that something was watching him through a glass plate in the ceiling.

I first met Albert in 2004 and was initially skeptical about his experience. Floating into the craft? Cattle mutilations? Surely, I thought, he was mad. The talk became intensely personal at times, and after confiding that my entire family, my girlfriend, and several of my favorite Hollywood stars had been killed the previous year in a tragic skydiving accident, he offered to introduce me to some of his friends. And that is where I learned the truth.

His friend, Pastor Zacharias, helped me deal with my grief through the completely legitimate science of hypnosis. That is when I learned that I too had been a victim of the men from space.

Yes, it's true! All that I have written here has been a lie! The Pastor showed me that I had been abducted by aliens, and that they had erased my memory using advanced alien gamma brainwave technology. My writing for this paper has been nothing more than a nervous preoccupation, a way for my subconscious to speak out even as my conscious mind, and writing style, tried to suppress it.

I've always had a long history of the paranormal, as do many who encounter UFOs or strange monsters. As a small child I can remember seeing furniture float across the room on its own, and I remember having vivid dreams of strange-looking owls that watched me through the roof at night. I've always been able to see auras, but I always assumed it was just an optical illusion. There's a year of my life that I don't remember: It was my junior year of high school, and the only thing I can recall is standing next to a tiny shanty and telling someone I was surprised their home was so advanced. My parents found me in New Jersey, hopped up on drugs, but I now know that this was clearly an alien event. Once, as a small child, my aunt exploded. The police say that it was clearly a terrorist act, but I knew the truth: Psychic energies had built up in her like a battery until she could take it no more.

Anyway, back to what happened to me on that fateful night. I was walking, alone of course, down a deserted rural road. Things began getting strange: the insects stopped making sounds, and my whole body began to feel numb. I was surprised to learn that I had covered only five feet of ground in four hours. Then I saw it: It was a perfect sphere, glowing with every color of the rainbow, and it was hovering above a nearby mountain. I felt myself being lifted into the vessel, where I was attended by tiny gray aliens with long fingers. Sort of like the ones from that one episode of The X-Files, which I had seen the night before. In the room I was surprised to see popular comedian Mitch Hedburg, but without his face! Where his eyes and nose should have been was only a mass of wires and circuits! Mitch Hedburg is actually an alien robot. But back to me: The alien surgeons performed a number of tests on me, some of which were unpleasant (like when they cut off and then reattached my left hand) and some of which weren't so bad, such as the extensive anal work.

At one point I believe that the aliens thought I was knocked out, but I was fully conscious. Looking down at me from the window in the ceiling, who should I see? Bigfoot! The hairy biped was standing in front of some sort of control panel, and next to him I saw a featureless man in an Air Force uniform. The man saw me and said something to Bigfoot, and the next thing I knew I was at home, sitting in front of my television. For some reason I stank of bourbon: I suspect that the aliens doused me with it to keep people from believing my story.

For the next week, my home was plagued with a poltergeist that moved things around when I wasn't looking, and a tiny ball of light that I noticed occasionally out of the corner of my eye. As I sat writing this article, possibly my last, I was visited by a dreaded Man In Black, who advised me not to tell anyone anything about my newly remembered experiences. He then ate a bowl of mints I had out on my coffee table, made some chirping computer noises, called himself AX-12 from Gharnasvarn, did a handstand, and left in a shiny black Cadillac with purple headlights.

But never fear, dear readers! As of today, April 1, I will fear nothing! Nothing will keep me from writing! Next week we shall examine the indisputable proof I have to back up my claims. A roll of film showing blurry round objects in the sky, a number of small, not uncommon looking scars left by the alien surgeons when the examined me, and a display of my formidable psychic power all await you. Keep watching the skies, for they are out there!

First Published in The Rectangle, 1 April 2005