The Strange Tale of Ronnie Hill 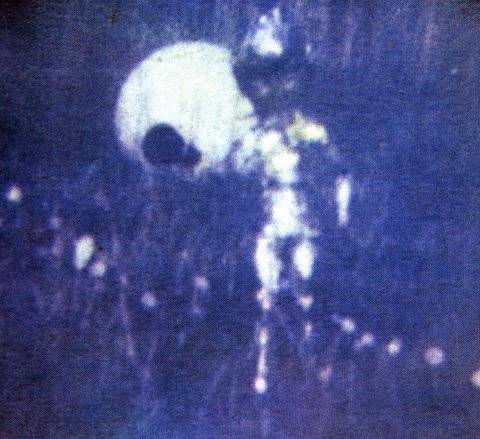 The study of the UFO phenomenon is, at times, a highly contradictory one. UFO enthusiasts will fight to their last breath to convince the world that a certain case, which has no physical evidence behind it, is absolutely true; yet, on other occasions, cases which have at least something physical to them are ignored.

For instance, we have the case of a boy named Ronnie Hill, aged 14, of Pamlico county, North Carolina. On the fine summer afternoon of 21 July 1967, he was playing in his family’s garden, apparently alone, when a strange scent filled the air. It was so bad that it made his eyes start to tear; he became suddenly concerned that this malodorous aroma had to do with the spaceship landing in a nearby field. Thinking, and quite rightly, that no one would believe him if he told them he’d seen a flying saucer, he ran inside to get a portable Kodak camera.

Returning to the scene, Ronnie saw that the spaceship, a spherical white thing that he estimated to be about 9 feet in diameter, had indeed come to rest in the nearby field. Ominously, from behind the craft stepped a creature clad in a shiny silver suit, with spindly, thin legs and an oversized gnome head. It carried a black object that it inserted into the ground, withdrew, and then returned to his ship, which departed for points unknown. In the ship’s wake, Ronnie could smell something similar to propane gas, but the thing that scared him the most was that this whole nightmare scene played out in absolute, dead, total silence. No birds chirping, no insects whirring, no nothing.

At first glance, this is the sort of alien encounter that occurs every day. Well, supposedly occurs every day. Fodder, perhaps, for the tabloids? Not so! Because Ronnie Hill, in a feat of either courage or total stuttering foolishness, snapped a picture of the space monster before he returned to his ship and departed for the stars.

Incontrovertible proof that space aliens have appeared on earth to kidnap her dirt and startle her children? Perhaps. Perhaps not. There are several noteworthy things about the photograph:

The point is that the photograph itself leaves a lot to be desired. But UFO enthusiasts have championed weaker causes. Surely a 14 year old boy, whom teachers and parents described an honest, decent type, would be considered a highly reliable witness? Actually, not so much. The first thing that the young man did after obtaining his photograph was get a copyright on it, ensuring that all profits from his selling the photo would go to him. I consider this a damning criticism of our modern education system, as in 1967 a 14-year old boy knew how to do this, and today a 25 year old man has no idea how to even begin the copyrighting process.

Anyway, the second thing that the boy did was mail a copy of his photo to a UFO magazine. Sadly, they had slid into insolvency and were unable to purchase the photo from the boy, but the editor of the magazine did forward his correspondence to investigator John Keel.

So Ronnie Hill wanted to make a profit off of this picture. There’s nothing wrong with that. People involved with UFOs routinely make fortunes from telling their insane stories. What is it that makes his case, one with potentially world-changing evidence, different from the tales of others? Abductees such as Stefan Michalak and Travis Walton have made fortunes and recruited armies of True Believers with no physical evidence, much less a photograph.

There is little doubt in my mind that this whole thing was a hoax on Ronnie’s part in an attempt to get some quick cash. The way he acted and the lousiness of the photograph scream hoax. I’ve found a report from, of all places, the International UFO Museum & Research Center in New Mexico, which lists the Ronnie Hill case as a “foto hoax – small model plus eggshell” but there’s no explanation as to how they came to this conclusion.

Assuming that it is a hoax, it illustrates a somewhat odd paradox: if you’re going to try and make money from your UFO story, less evidence is better than more evidence. If Ronnie Hill had not taken his photo and just written a story of his encounter, he’d have been able to sell it to someone for sure. He might even get a book and a movie out of the deal. Because when there is only a story being told, the only way for skeptics to test it is to try and pick it apart, show the inconsistencies, and so on. When one brings up an actual piece of physical evidence, such as a photograph, there are impartial scientific analyses that can be performed. This is a larger trend in the field of UFOs; the less evidence that something happened, the more famous the incident becomes. Cases based on nothing more than a single person’s testimony are considered irrefutable truth; cases where there is some sort of actual physical evidence, such as the case of Ronnie Hill, fall by the wayside. Does this mean that even the most hardened UFO enthusiast can’t look at the photo with a straight face? Is it an example of some sort of larger institutional blind spot? I don’t know. All I know is that despite the fact that the UFO enthusiasts claim that they are interested in finding physical evidence that our earth is being visited by monsters from beyond the moon, cases that have physical evidence remain uninvestigated.