The Drunkards of Ririe

"I have seen drunkards do more than this in sport..."
~King Lear, Act II Scene 1 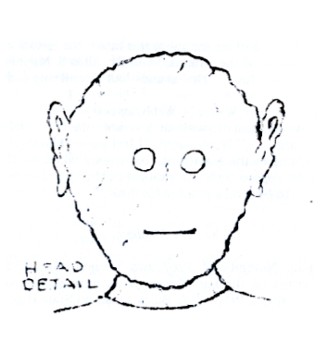 Original sketch of the spaceman that terrified two drunkards

If you believe everything you read on the internet, space aliens have been visiting our planet for quite some time now, and they have brought along an impressive selection of equipment. They’re said to possess anti-gravity machines, machines that let them teleport instantly, sophisticated robots, and more. But the coolest thing I think I’ve ever heard anyone claim aliens have is a device that lets them know who is and who isn’t drunk. Like a Breathalyzer. From space.

The claim that space aliens can somehow tell who has and who has not been drinking beer stems largely from an incident that took place in Idaho almost 40 years ago. Two youths were driving home from having a few drinks when, at about 9:30 at night, they saw a blinding flash and a small flying saucer with a clear dome appeared in front of their car. The description of the flying saucer matches the silliest of the silly craft drawn in comic books. You might recognize it as identical to Kang and Kodos’ ship from The Simpsons: shaped like Saturn, the top had a clear dome in which could be seen two small creatures. They appeared to be piloting the craft, the outside of which had a couple of lights.

The creatures themselves were the type of aliens that people reported before the movie Close Encounters of the Third Kind was released. After collecting dozens upon dozens of drawings made by people who claimed to see aliens, Martin Kottmeyer came to the conclusion, which seems to me to be entirely air-tight, that there was a distinct shift in how people described aliens after this film came out. Previously, aliens were squat and short-necked, with beady black eyes. After the film, which contained skinny aliens with long necks and big eyes, was released, people began reporting seeing more and more skinny aliens with long necks and big eyes. Go figure. Anyway, the two men reported sighting two squat, short-necked creatures with beady eyes.

But I digress. The creatures that were piloting the small craft were of an extremely creepy nature. The two startled drunkards got a good look at them, because their car suddenly stopped running. The dome of the craft opened up as if on hinges, and one of the two ‘crew’ floated down and into the car. It was about three and a half feet tall, wearing some sort of backpack that stuck above and behind its head; noseless, it had a thin slit-like mouth and tiny, black eyes. The monster’s skin was pitted, creased, and wrinkled, and it had two large, pointed ears. It had no hair.

The being floated down and came in the driver’s side door of the stopped car. It slid in behind the wheel and the car was moved, either driven by the creature or towed by the saucer, out into a wheat field. As the car moved, the creature behind the wheel ‘talked’ in a high-pitched, gibberish language, like a bird. The next time you're driving and feel drowsy, remember this story. If it doesn't scare your ass into staying awake, thanks for reading this article, Vin Diesel.

As the car rolled to a stop in the field, one of the drunk teens made a break for it. As he dashed the quarter mile to a nearby farmhouse, he was chased by a bright light supposedly carried by the second creature in the spaceship. Why the monster didn’t just follow him in the spaceship is unclear.

Anyway, the aliens got tired of putting up with this sort of thing and eventually flew away into the sky following a zig-zag pattern. The teen who had escaped was almost incoherent with fear, and when he finally got the farmer to return to the stopped car, they found his friend almost paralyzed in terror, his eyes squeezed tightly shut. The UFO was gone.

That night, or so the claim goes, many other people saw a bright light flying zig-zags across the sky. Local cattle were spooked by something and began to act nervously for no apparent reason. I’ve read, numerous times, that other people in the vicinity of Ririe, Idaho, on that night had similar encounters with tiny monsters in a flying saucer. The only thing to connect all of the incidents together was that the inhabitants all lived in the same area, and all had been drinking more than a little that night. However, the story above is the only story I've been able to find that had actual names, quotes, and the like. Other than these two guys it seems to always be "a friend of a friend saw..." or "other unnamed witnesses reported...."

Because of the only connection being booze related, space aliens must have some sort of mechanism that lets them determine who is and is not drunk at any given time. Or so the story goes.

There are plenty of things that make me suspicious of the veracity of this tall tale. Despite the fact that every UFO enthusiast is quick to note that many other drunkards in the area had similar encounters, not a single person other than the two in the car are named. Apparently, a UFO investigator was able to track down a third man that claimed he had been the victim of a similar space carjacking, but the man refused to give his name. Maybe you’re willing to take some anonymous guy’s word for it that this happened. I’m not.

This whole case centers on the idea that you’re willing to blindly believe the words of “credible witnesses.” There is absolutely zero physical or non-anecdotal evidence to back the two men’s version of events up. I’m not sure about you, but if my Aunt Helen tells me we’re having pierogies for dinner, I don’t believe her until I have some physical evidence sitting before me. Specifically, some pierogies covered in salt, sour cream, and buttered onions. Maybe you’re the kind of person that will believe a drunk guy who claims his car is in a field because aliens hijacked it, but I think the truth is a little simpler. Beer just makes some people say, see, or do crazy things.

I will concede to the UFO enthusiast that, except for the backpack that the creature was wearing, his description sounds somewhat similar to the creatures that attacked a farm in Hopkinsville, Kentucky in the 1950s. However, small, big-eared, hairless monsters like this had actually appeared on the covers of comic books and pulp novels in the early decades of the 1900s.

Here’s where I distinguish myself from other authors. In service to you, the reader, I decided to put my theory to the test. If this whole thing never happened and it’s just a simple case of beer making people tell goofy lies, perhaps too much beer would make me claim that I had been abducted by aliens. To test this theory, I went to a local pub with some friends, upon whom I bestowed the title of “research technicians” for the evening, and ordered a dozen Pabst Blue Ribbon tall-boys, which you damn Yankees apparently call ‘slammers.’

Anyway, using my meticulously-kept lab notes and the testimony of fellow scientists at the table, I have reconstructed what went on during the experiment. Here are some excerpts:

After beer #3, I seem to have developed an intense, perhaps supernatural, craving for buffalo wings. This was to last until beer #5. Halfway through beer #8, a tiny, wrinkled creature with tiny, beady eyes slid into the booth with me. It began babbling away in high-pitched gibberish. Terrified, I attempted to leap from the booth and run to get help, but my fellow scientists convinced me the creature was just trying to get us to buy her a drink. After beer #9, I began to make absurd claims, such as that I knew the guy who first patented the paperclip and that I was the world’s strongest millionaire. UFOs were not mentioned during these absurd claims. After the final beer, I’m told that UFOs still had not come up in conversation. However, I did wake up the next day naked, miles into a wheat field, and there’s probably no non-paranormal explanation for that.

So my experiment didn’t prove my point. The fact that I, intent on getting blitzed and making outrageous claims about UFOs, neglected to do so certainly doesn’t help my claim that UFO encounters rise proportionally with beer consumption. You win this round, UFO enthusiasts.