Faith vs. Bullets: Bullets Win
"Or shall we give signal to our rage, and stalk in blood to our posession?"
~Phillip, King John, Act II Scene I

In writing this column, I usually focus on crass matters of a pecuniary nature. Psychics, occult enthusiasts, believers of the paranormal, people who have seen UFOs, and other con men are well known for being able to sucker money out of those who lack skepticism. But it could always be worse. If you’ve been taken for a ride, chances are you’re out of some cash. At least you’re still alive. Not so lucky are the less-skeptical inhabitants of parts of the rest of the world.

Tientsin, China, in 1900 was no place for non-Chinese folks to be. The Chinese, tired of foreign powers meddling in their affairs, were ready for rebellion. They besieged the part of the city containing the foreign embassies; originally built so that the government could keep track of foreign diplomats, the Europeans turned this area into a veritable fortress, holding off the Chinese for almost two months before they were resupplied with fresh arms and men.

They were fighting a combined force of government troops and guerillas known by a variety of names, but the one I see most often is The Fists of Righteous Harmony, commonly known by their nickname, The Boxers. These men believed that they did not need weapons, for the bullets of their enemies would bounce harmlessly off their skin; they also had faith that once the battle was joined, millions of spirit soldiers would rise from the dead and fight alongside them.

It was a short-lived rebellion.

The European nations banded together and turned China into a slaughterhouse. The Chinese government was forced to sign a humiliating treaty that more or less gave the European governments everything they had.

Am I saying that the Chinese of the time should not have rebelled? Absolutely not. They were being treated terribly and had every right to rebel. What I am saying, is that blind faith led them directly into a meat grinder. If they had not had blind faith in their own magical abilities, if some of the leaders or thinkers of the time had been more skeptical about unproven, unprovable claims, then the rebellion wouldn’t have been the hollow exercise that it was. (I should note that the Boxers didn’t slouch when it came to slaughter; the country was rid of foreign missionaries, Roman Catholics, and Christians in general practically overnight.) 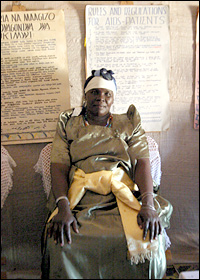 Alice Auma, host to the spirit Lakwena: she made butchers of her enemies.

But not everyone learns from history. This same story was to play itself out in 1986, a quarter of the way around the world in Uganda. A woman named Alice Auma claimed to be the reincarnated soul of a man named Lakwena. His spirit had entered her, and after conferring with all the wild animals, as well as with such formations as a waterfall and a mountain, came to the conclusion that both sides in Uganda’s civil war were at fault. So Alice, now under the name Alice Lakwena, set forth to burn a hole in the earth, and rid it forever of these warring factions and bring peace once again to her homeland.

Lakwena was supposedly an Italian army officer that had drown in the Nile during the first World War, which was supposed to have been our last. He spoke 74 languages fluently, and when he first took possession of Alice, she seemed to be a madwoman, running about her town speaking in tongues and whipping herself. Like the demon Legion from the bible, his numbers were many; his alone was not the only spirit dwelling in this woman’s body. Also like his biblical counterpart, his power was great; based solely on his charisma and the use of healing charms said to rid villagers of sickness, Alice and Lakwena amassed a great army.

After being turned down by the resistance groups, she formed the Holy Spirit Mobile Forces, a force of upwards of 10,000 combatants. She, rather, the man trapped in her body, ordered these men to forsake their old tribal customs and burn the accoutrements of their previous religions. In so doing, they became pure and reborn in the lord, and would therefore not need to use weapons of any kind. Once again, the old canticle was taken up: they had only to rub their bodies with shea-nut oil, and bullets would bounce harmlessly off of them.

At first, they had great success. The sight of thousands of naked men, slathered in oil, chanting hymns and charging the battlefield was sufficient to cause enemy soldiers to throw down their weapons; the first few battles fought by the Mobile Forces were won as the enemy fled in terror.

During my Junior year of college, I became fascinated by an elite Vietnam-era US Army unit known as the Long Range Reconnaissance Patrols (LRRPs.) Six men would be dropped off by helicopter deep in enemy territory to listen and gather intelligence. On one mission, a LRRP brought along a stadium air-horn; after being ambushed by North Vietnamese soldiers, the man set off the air-horn, which scared the ambushers so badly that they fled. But the LRRPs knew something the Lakwena did not; these things can only be used so many times before they become useless.

The LRRPs in that unit never used an air-horn again, but Lakwena never changed his tactics. The Mobile Forces continued to march, singing from their hymnals, unarmed and shirtless. To be short, they made butchers out of their enemies; as they marched on the Ugandan capital, the Mobile Forces were slaughtered by artillery fire. A handful of men survived, as did Alice, who fled on a bicycle.
Alice Auma used her charisma to muster a force of thousands of men, and under her leadership thousands of men died terrible deaths. There was no justice for them. Alice lived out the next 20 years in a Kenyan refugee camp, spending most of her time in the bar. Those thousands of men are not the only crime on her conscience. The remnants of her army formed the Lord’s Resistance Army, a band of killers that continue to this day to abduct children for use as soldiers, turn villages into slaughterhouses, to rape and pillage on a scale rarely equaled in all of mankind’s red-dimmed history.

There is a place in the life of every person for faith in a higher power. But there is also a place for doubt; when another human being tells you that god is on your side, that he will protect you from all harm, and that he wants you to kill your fellow man, their words must be weighed with great care, their claims dissected to the full power of one’s intellect.

It is hard to believe that tens of thousands would follow a prophetess to their doom in the modern day, but the story of Alice Auma is not even two decades old. Among the children, the fanatics, the ex-cultists, and the peasants that formed her forces, I’m sure there was many an intelligent, educated man, who trusted her with his life and in return gained nothing but death.

Also, for the record, I've met a handful of Marines and a couple of soldiers.. They have greater faith in bullets than anyone has in anything else, ever. It doesn't matter how strongly you believe a bullet won't harm you: the people you're up against probably believe more strongly that those bullets will.