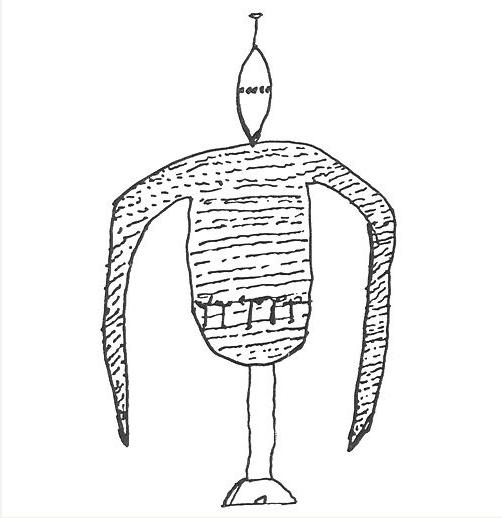 I once wrote that I thought that the Pascagoula case, in which two fishermen were abducted by carrot-nosed elephant monsters, was the case of alien abduction that had the weirdest looking aliens. I stand corrected. That torch has now been passed to the octopus keg monsters that abducted Antonio La Rubia in 1977.

For Mr. La Rubia, a resident of Paciencia, Brazil, September 15th started off fairly normal. He awoke at 2 a.m., washed his face, brushed his teeth, and was then off to his job at the bus company. Exiting his house, he for a moment thought that the object in the field behind his house was the bus that had come to pick him up; moments later he realized that the object, 235 feet across, “shaped like a hat”, dull-gray in color, and floating in mid-air, was not, in fact, a school bus.

Prudently deciding to flee the scene, La Rubia decided to show the spacecraft the back of his shoes, but he didn’t get far. A blue light suddenly illuminated the area, and he was paralyzed. That was when he noticed three creatures that had been sent to retrieve him.

I can think of only one other creature as bizarre as the ones La Rubia reported seeing, and that was the almost certainly hallucinatory toilet paper mummy that dissected Sandra Larson’s brain. The creatures were about four feet tall, but each had an antenna sticking out of the top of its head that made it at least another foot and a half tall. The creatures had heads shaped like “American footballs” that had a band moving horizontally across them. They look kind of like the sunglasses the blind black guy on Star Trek wore. The bodies were “stockier and broader” than La Rubia’s, and from his sketches, I estimate them to be about the size and general shape of a keg. Each creature had two arms that looked like elephant trunks: flexible tentacles that ended in something like a single finger. Considering what they did to La Rubia, I will assume these to be middle fingers.

The creatures only had one leg, which looked sort of like a bar stool. In fact, La Rubia initially thought that they were sitting down on something. He doesn’t explain why he gives up this theory in exchange for them having one weird, fat leg. The creatures were a dull gray in color and covered with some sort of rough scales. Upon questioning, La Rubia decided that the scales weren’t armor, since they didn’t seem to impede their movement, but must instead have been lizard-like skin. To round out this parade of madness, the creatures did not walk, they floated a little above the ground, and they wore utility belts full of various gadgets.

La Rubia noticed that one of the monsters was in front of him, one to the side, and one behind him. When one pointed an object sort of like a syringe at him, he began moving towards the spaceship, which he, understandably, very much did not want to do. When he tried to change direction, though, he found he was trapped in a giant, invisible mason jar. 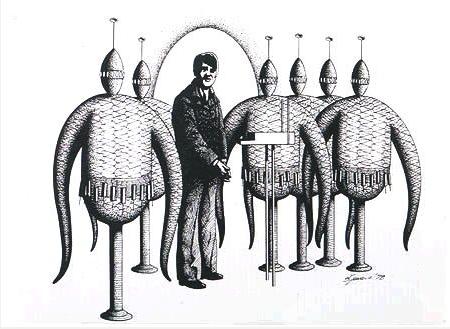 He’s not sure how he got into the ship; one moment he was outside in the field, the next he was in a hallway made of dull, aluminum-colored material. Everything was shiny gray or light blue. He was led into a room which contained two bizarre things: something like a piano, and a bunch of the octopus keg monsters sitting around watching something like a TV.

Up until this point, La Rubia was unable to speak. Now, however, he found he could shout, loudly demanding a answer as to what was going on. This seemed to cause the creatures immense pain, as their antennae, which had been spinning madly, froze in position (they look like soup spoons), and the monsters grabbed at them with their one-fingered tentacles. They also fell over on their asses. Well, where their asses should have been, anyway.

Immediately La Rubia was paralyzed again. He found he was having trouble breathing, though he could hear the monsters breathing loudly. One of the creatures then removed something from his belt and put it in the ‘piano’. When he struck a key, an image would appear on the wall. There were ten (or more!) of them, including such things as a dog trying to attack one of the monsters, La Rubia naked, La Rubia soiling his pants, La Rubia on an examination table, and La Rubia on fire.

The rest of the night was fairly uneventful: the creatures withdrew a pint of blood from his middle finger without leaving a mark and dropped him off near a police station in a nearby town. Despite the fact that the ship was supposedly hundreds of feet in diameter, the only other witness was the town drunkard.

In the upcoming weeks, La Rubia became violently, terribly ill. So ill that he lost his job at the bus company (while there, he was so hot that he asked a comrade to spray him down with a hose). Everything that he was shown in the images inside the ship came to pass, though for some reason the UFO enthusiasts are adamant that he never crapped his pants (as they say it: “passed a stool in his trousers.”)

Needless to say, there are some things in this story that make me doubt that it actually occurred. First, the description of the insane creatures that kidnapped him: nothing even remotely similar has been reported before or since. Does this mean that this particular alien race visited us only once? That they were regular aliens in disguise? That they were some sort of specially-designed robots for this specific task? All of this is speculation. The much more appropriate response to this criticism is that, unless more octopus keg monsters are reported, this story needs to be taken with a grain of salt.

From a point of logic, I don’t understand the thing about sound hurting the monsters. If La Rubia speaking loudly causes them intense pain, they must consider each other’s breathing, which La Rubia could distinctly hear over the hum of the ship, an intolerable and overwhelming cacophony. Each time one of them farts must be like setting fireworks off inside a car, at least for their eardrums.
La Rubia claimed that he was pretty sure that the enormous spaceship had been sitting in the field near his house, but an investigation was unable to find any sort of landing mark. Because of this, UFO enthusiasts later add things like “it must have been hovering above the ground” when they retell this story. One should also recall that this ship, larger than most naval vessels, flew over a heavily populated city, and the only guy to see it was the town drunkard. No comment.

The bus company for which La Rubia worked apparently had a psychologist on staff. This seems exceedingly odd to me. Regardless, he met with La Rubia and described him as quite normal, before sending him to a hospital. This is one of the strangest parts of the story, to me: one does not declare someone normal and then send him to a madhouse.

I have not met La Rubia. I’ve never even been to Brazil. But from personal experience, this seems to me a nightmare produced by sickness. Every time I’m ill, my dreams become dark and insane. Now that I think of it, these fevered nightmares frequently feature robotos. Is it that unreasonable to believe that, instead of a UFO making La Rubia ill after abducting him, he was badly ill and the UFO is a product of his fevered dreams? His illness seems to have lasted much longer than the illness usually reported after a UFO encounter is said to last. Considering that his story bears only superficial similarities to other tales of alien abduction, and that no physical proof aside from his illness (which could have come from anywhere and likely has quite earthly origins) exists, I think that the only monsters troubling Mr. La Rubia are not from beyond from the stars, but from within himself.

The original investigator makes a number of wild speculations as to why the creatures abducted La Rubia, but one thing she said stands out: "Shall we have time to reflect on all this before they [arrive] in larger hordes?"

30 years after their initial arrival, I think we can say that perhaps we’ve been doing too much reflecting on all this.

A sketch by Harry Trumbore