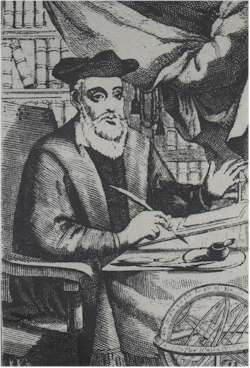 I have a tendency to avoid extremely popular topics, such as Bigfoot or the Loch Ness Monster, because there’s so much information on them, it’s more or less impossible to try to address the issue thoroughly without writing a book. After a bit of thinking, however, there’s one guy who can be revealed as pure baloney in just a few pages: Nostradamus.

Nostradamus was born in 1503 in France with the rather suave-sounding name Michel de Nostradame. He lived a fairly normal life, obtaining a degree from university, and watching his wife and child die from the plague. Just to add insult to injury, it was shortly after their death that the Inquisition sent for him to be tried for heresy: some years before, he had mentioned that a particular religious statue was not very artistically pleasing. The statue-maker, naturally, denounced him to the church.

So Nostradamus did what anyone would have done: he ran and hid. He managed to stay clear of the church for the rest of his life, and published almanacs and other books to get by until he married a rich widow. Now living comfortably, he converted the top floor of their house into a study, where he would stay until the early hours with his occult books, writing his predictions. He was so popular that even the queen of France became smitten with the sorcerer, and ate up everything he told her. Until, that is, the church came around and inquired about what Nostradamus was doing, at which time he once again fled.

It is, of course, due to his predictions that I am writing here. Nostradamus wrote and published what were called quatrains, four-line poems. 100 quatrains made up a centurie, and before his death he published about nine and a half of them (one centurie was unfinished.)

The poems are written in an obscure blend of medieval French, Latin, Greek, Italian, and a regional French dialect called Provencal. Occult enthusiasts the world over claim that they predict future events, ranging from the death of a French king in Nostradamus’ day to the terrorist attacks of September 11th. I’m sure everyone has heard of him; he’s nothing short of a household name.

There’s a bit of a problem with the quatrains: they’re written in such a mix of languages that no one without an advanced degree in languages is going to be able to decipher them for themselves. If you read his writings, you have to place your faith in the translator; such is not always a safe thing to do. For instance, take quatrain 24 of centurie II:

This is the one that many people claim predicts the rise of Adolf Hitler. The hardcore believers, such as Erika Cheetham, translate this quatrain as:

“Beasts wild with hunger will cross the rivers,
The greater part of the battle will be against Hitler.
He will cause great men to be dragged in a cage of iron,
When the son of Germany obeys no law.”

Clearly this predicts the second World War! The river Bug in eastern Russia was the jumping-off point for the beginning of Operation Barbarossa, the German invasion of the Soviet Union. The second and third lines are obvious. The third line could refer either to the large number of POWs captured by the Germans in their lightning victories (and initial victories, to later become defeats) against other countries, or the multitudes that perished in the gas-vans of the einsatzgruppen. But how does a non-hardcore believer interpret the text? James Randi, arch-mage and godfather of skepticism, translated it thusly:

“Beasts mad with hunger will swim across rivers,
Most of the army will be against the Lower Danube.
The great one shall be dragged in an iron cage
When the child brother will observe nothing.”

Hmm. That makes substantially less sense. Randi, with a better grasp of history than Cheetham, knew that ‘Hister’ is not an ancient name for ‘Hitler,’ rather, it is a geographical region near the lower Danube river. Of course, the occult enthusiast claims that since Hitler was born near the Danube, it still clearly refers to him. I’ve got to admit: they just don’t know when they’ve been beaten.

That’s the problem with all of Nostradamus’ writings: it’s open to interpretation. They are written in such a vague style that they could be bent to take on any meaning. It’s like in ancient Greece, when young men would go to the oracle and ask whether or not they should join the army. The oracle would reply “You the Romans will conquer.” Is the young man going to ruin the Romans, or are they going to roll over him in an unstoppable wave of phalanxes? It’s all open to interpretation.

People claim that Nostradamus could forsee the future. And yet, out of his 942 quatrains, only a handful are ever mentioned as having occurred. What does this mean? Has not enough time yet passed for Nostradamus’ predictions to come true? Or is it simply that, out of 942 vaguely-worded verses, a handful are sure to make sense? Ask yourself which is more likely (hint: it’s the one that does not involve psychic mind powers.)

You can find all this information on the internet. But here is where I distinguish myself from other authors: I claim that I am as powerful a prophet as the might Nostradamus. I have written ten quatrains, which I am giving the bold title of The Magnificent Deci-Centurie. I have forseen that, in the next month, all of the things described in them will come to pass. And I’m doing one over on Nostradamus: he wrote in an obscure mixture of languages that could be translated in any which way. I’m doing them in plain English.

Additionally, I’ve taken a handful of four line lyrics from songs by the best band of all time, Devo. It just might be that they are better psychics than I. A month from now, expect an update, at which time I will most likely reveal myself and the fellows in Devo to be the world’s foremost mystics.

These are imitation quatrains that I wrote on the 15th of April, 2006. Expect an update on the 15th of May as to whether or not they came true. I wrote them the same way that Nostradamus did: I just sort of sat around until they came to me. I avoided thinking of things that will likely happen in the near future and phrasing them vaguely: I just sat until funny phrases popped into my head. Below this can be found ten quatrains made from Devo lyrics. They will also be analyzed in one month's time to see if that group has been trying to send us coded messages about the future.

Quatrain I:
In the barn near the river filled with water,
The largest of the turkeys shall find madness.
Gobbling wildly against the bubbling light,
After a long time silence shall be found.

Quatrain II:
A squirrel with a tail of bushy hatred
Shall find itself lost in the smallest forest.
No map, no book, no poem, no manual
Shall help him find his nuts.

Quatrain III:
From the great desert, a fish emerges wearing a yellow crown.
In one fin, it holds the pinecone of peace,
In the other, a bloody hammer.
Beneath his tail grow wildflowers of harmony.

Quatrain IV:
In the place that contains not the essence of life,
The Briton readies his accent against the coming storm.
The largest planet whispers a warning in the dark:
From the highest place falls the longest moustache.

Quatrain V:
The hollow princess stands before the twinkling stars
Bound unto the loathsome creature.
In a heavy cage of glass shall she be conveyed
Unto the dismal place.

Quatrain VI:
Water boiling over a heatless fire
Is not a place for cooking soup.
The prince of folly, ignoring the words of wise men,
Adds carrots and potatoes.

Quatrain VII:
Dreams tumble from her mouth as snow from the sky,
Landing with a splash near the Amazon.
Gray clouds gather above the mountains on the horizon
And strangle the sunlight.

Quatrain VIII:
Astride the rampart formed of broken dreams,
A slice of bacon shall be found.
O, what sorrow! O, what horror! O, what wretched hope!
Undercooked, the slice has spoiled in the sunlight.

Quatrain IX:
An alligator blinks in the sunlight
And pulls his face down over his eyes.
The savage hippopotamus lulled into sleep,
A new king rules the bathroom.

Quatrain X:
Secret words come together on a bitter page
The foolish one showers ancient names in vulgarity.
Knights arise from the North, East, and West,
Many teeth will be broken on the soufflé of hopelessness.

The Devo Deci-Centurie: Predictions from the Spuds 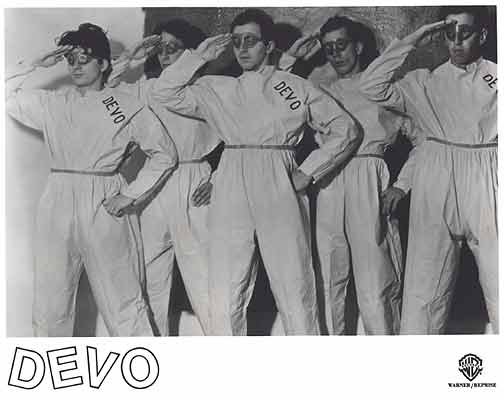 Song: Snowball
My baby took our love and then she rolled it up
Rolled it up a hill like a ball of snow
Like a snowball grows until it gets too big
Until she lost control and it rolled back down

Song: Come Back Jonee
Jonee jumped in his Datsun, drove out on the expressway
Went head-on into a semi his guitar is all that's left now
He made her cry now she calls his name
Jonee you're to blame

Song: Freedom of Choice
A victim of collision on the open sea
Nobody ever said that life was free
Sank, swam, go down with the ship
But use your freedom of choice

Song: Gut Feeling
Something about the way you taste makes me want to clear my throat
There's a message to your movements that really gets my goat
I looked for sniffy linings but you're rotten to the core
I've had just about all I can take you know I can't take it no more

Song: Some Things Never Change
I saw the news today oh boy a thousand stories that we've seen before
Small minds play at some big time games and everybody else pays
Make no mistake they're on the take they like to keep it that way
Some things never change

Song: Sexi Luv
On a day when the sun isn't shining
It's like a rose that grows
Through the concrete in the middle of a parking deck
Remember luv it's all around you

Song: Mr. B’s Ballroom
They know the limits 'cause they cross them every night
The dull sensations as it turns real hot
Why, the guys in the back with their heads on the floor
Surrounded by their buddies they're all hollerin' for more

Song: Planet Earth
Where pleasure follows pain people go insane
Fly around in planes pray that it won't rain
Drive around in cars get drunk in local bars dream of being stars
Well I lived all my life on planet earth