I’m not particularly fond of the city. It’s too loud and crowded, there are too few plants, and the mayor’s genius plan to tackle a rising murder rate was to introduce an anti-smoking bill that prevents the populace from lighting up in public places whose owners don’t have enough money to get around the ban.

So, when I read about the convention that Buck Nelson had on his farm in the 1950s in Missouri, I thought it sounded lovely, a slice of the old, fading America. For a mere 50 cent donation, one would be admitted to a large picnic, where the attendees camped out in their own camping gear, there was live music from a local “hillbilly band”, and there was an on-site cafeteria serving sandwiches, coffee, fried chicken, and so on. I can imagine it now: sitting on long plank benches, a cold glass-bottled soda in one hand, a crispy drumstick in the other, the sounds of banjos in the air. Were someone to offer to dance a polka* with me, I’d think it to be heaven. Not even the fact that the picnic was a convention for lunatic space men would put me off.

The rest of the flyer, I am sad to say, reads “SPACECRAFT CONVENTION – Speeches and Discussion – Hear Speakers Who Have Contacted Our Space Brothers.” As I read this, it never once occurred to me to follow my usual course; to disparage, deny, denigrate and demonize the UFO enthusiasts in question and their insane claims. Why will have to wait. The convention was held the last Saturday, Sunday, and Monday of June and started at 10am. Buck Nelson didn’t just host it, though; he was a main attraction.
A local man who had at one time been a cowboy out west, Nelson moved to minor celebrity status after his supposed run-in with three spaceships. One night in 1954, he awoke to the three “things” hovering over his farm; when he shined a flashlight at them, he was struck by a beam of light “hotter and brighter that the sun.” It wasn’t an attack, though: the beam of light cured a back problem he’d had for a while, and he soon realized that his eyesight, which was deteriorating, had been much improved by the incident.
That night, he was not to meet the occupants of the spaceship, but they did eventually introduce themselves. Their names were, and I swear with your god as my witness that I am not making this up or exaggerating it, Bucky and Bob. They had a huge dog, weighing around 400 pounds, named Bo. It sounds like these space monsters were good old southern boys, and they were certainly hospitable: they took Nelson on a trip to their home planet as well as to the moon and Mars.

Their home planet seems to have been a lovely place. Homes were made with rock and steel interiors. There were no government buildings, for the world was totally at peace, and no hospitals, for the population knew the secrets of living a healthy life. They had cars without wheels or bumpers that floated a few feet off of the ground, obviating the need for roads, and lived by a simple set of twelve rules similar to the ten commandments. (One of the two extra commandments was to not eat anything that wasn’t food. Good advice, but does that really demand a commandment of its own?) They also had meat, fish, eggs, and salads to eat, and out of their day, they needed only to spend one hour working. Their day was divided into 38 parts, roughly an hour long apiece. They had three moons, and the sun was about as bright there as it was here, though it hung much larger in their sky.

You’ll note that I’ve avoided naming their homeworld, mainly for crude, showmanship purposes: their home planet was Venus. I never would have guessed that, mostly because Venus does not have any moons, and her days are actually about 245 earth-days long. Due to the hilarious astronomical oddity that is retrograde motion, a Venus day is actually longer than a Venus year. Based on these two things alone, I think that it is safe to say that Nelson never went anywhere other than his own imagination; though I am sure there are UFO enthusiasts who claim that Nelson really did go to the alien home planet, but that they told him it was Venus in some sort of outer-space translation problem. 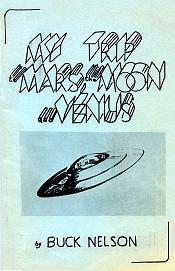 Nelson's book. Sadly, the guy at my neighborhood used book store had no idea where to find a copy.

When Nelson returned to earth to find that neither his neighbors nor the government believed his strange tale, he wrote a pamphlet called “My Trip to Mars, the Moon, and Venus.” He became an overnight celebrity and began to host his wonderful picnic. I wish that were all to the story, but, like all UFO enthusiasts, he had to make his dollar off of it. Remember the 400-pound space dog named Bo? He claimed that he was given the creature by Bucky and Bob as a present. If one were to send Nelson a bit of money, he’d mail out a tiny bundle of black hair that was supposed to have fallen off of Bo due to his exposure to cosmic rays. (The dog, conveniently, was much too shy to come out in public.)

So, Nelson was a bit of a con-man. He suckered some money out of unsuspecting dupes by sending them the hair of a space dog and selling them his fabricated tale of outer-space hijinks. A lot of people have done a lot worse, so I can’t really bring myself to judge him that harshly.

The question to ask, as in every case, is “if this person really just went out and made up a story, why would he have done it?” He probably didn’t do it for money, since he seems to have been content with a little trickle of incoming cash, and never moved on to any of the really big money-making scams (movies, cults, sequels, and so on.) He may have done it for the fame, since he became a bit of a local celebrity, but I think that’s just a tangential benefit. I think the truth lies in his story.

Imagine, if you will, a world where everyone lives by the ten commandments, where no one falls ill or uses drugs, where one need only work one hour a day, where more vegetables can be grown on one acre of land than most human farmers can get from tens of square miles, there exist huge, intelligent dogs, and where there is no need for government buildings. That’s not a tale of outer space. That’s every southern man’s idea of paradise. As a farmer, Nelson was likely tired of the backbreaking, long hours of labor for little remuneration, as a conservative adult in the late 1950s, he was probably very worried and a little disappointed by the drugs craze soon to sweep the nation, and as an American in general he probably held the ten commandments in high esteem and distrusted the government. What southern man doesn't love a good old dog? His tale was just a reflection of the dreams and hopes of a southern farmer.

Unlike all the other con men that get fame and fortune through their insane tales of UFO shenanigans, I can’t be upset with Nelson. He may have made a little more money than he should have, but he also hosted what I can only imagine to have been a lovely county fair-like event. I’m also not ashamed to say that the Venus he wrote about, his paradise, is not much dissimilar from my own ideal society.

I also believe that modern proponents of the UFO theories could learn a lot from him. Every article I write is a literary Bataan; it would be so much more pleasant for us all to just sit down in the shade, chicken in hand, banjo music in the air, and discuss things, rather than the current hate mail – article – hate mail cycle that we seem to be stuck in.

* - There's only one person I want to dance the polka with. Now that I think about it, this picnic would be all right by her.