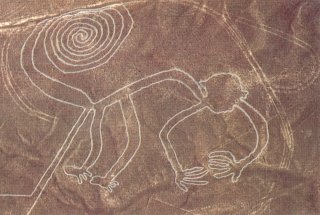 People have done some pretty insane things in the name of their respective gods. Some of the world’s most magnificent buildings, and most of its' most terrible slaughters, have come from people expressing their love for whatever it is they choose to worship. One thing that was not, however, created for the glorification of a higher power are the Nazca lines.

Well, that’s only sort of true. When I say that the Nazca lines were not created by or for the Nazca gods, I mean ‘gods’ the way that Erich von Däniken means it: space aliens. In the 1960s von Däniken wrote a book called Chariot of the Gods that claimed most of what ancient people worshiped were actually space people. So let me rephrase my thesis sentence: the Nazca lines were not built by, or for, space aliens.

They are, however, amazing. In the Peruvian desert along the pacific coast in an area called the Red Plain stand line drawings hundreds upon hundreds of meters long. When seen from the air these drawings clearly represent stylized birds, monkeys, spiders, and geometric shapes. Some of these enormous shapes can be found on the hillsides at the edge of the desert, and include human outlines. 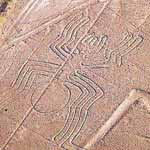 To call the location of these shapes a desert is sort of misleading: there’s no sand here. The desert is just an incredibly long patch of stones and soil. To create these lines the Nazca, who flourished in this area before about 600 AD, just picked up the dark surface soil and cleared it away, revealing the lighter colored soil beneath. No tools more complicated than a person’s hands (a technology I feel safe in assuming that the Nazca had some knowledge of) were needed to create these lines.

The problem arises when you try and explain how the Nazca were able to create such geometrically perfect shapes. The UFO enthusiast would have you believe that such a primitive, inferior people could not have done such a thing themselves; rather, they needed the aid of aliens and their spaceships to oversee construction. I, on the other hand, would have you believe that the Nazca are not as “inferior” and “primitive” as others would say. In their cloth weavings they used grids to create incredibly complex geometric designs: it does not require otherworldly intervention to transfer these ideas from the field of textiles to the field of laying stones in a field, uh, so to speak. 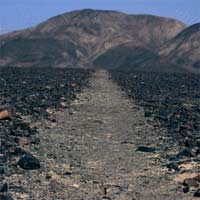 A closeup view of one of the Nazca Lines. It's just a line where soil was moved out of the way.

Don’t believe that the Nazca would be able to lay out a grid, put a little thought into it, and create huge artwork? I direct you first to your history book, where you will learn that before the time of Christ the Greeks had figured out the circumference of the earth using nothing more complicated than a hole in the ground and a stick. I also refer you to my article on crop circles from several weeks ago: in it I detailed how a bunch of bored British teens were able to create the entire crop circle phenomenon with the use of just a couple of sticks and a piece of graph paper.

Let’s abandon the above perfectly logical explanation to look at what UFO enthusiasts claim. The most common claim is that the Nazca lines represent some sort of alien airport, where they could land their craft and get out to stretch their legs, hit the duty free shop, and get a drink before the next leg of the flight (or something.) In the clear, pure light of logic and reason, this explanation dissolves utterly.

For instance: if the alien ships needed a location to land, that means they must come into contact with the earth, which would at least slightly deform the “runway” in the same way that the tires of a 747 leave big black marks behind them on the asphalt. Not even the most hardcore would-be alien air traffic controller can offer a single piece of evidence pointing to this. Their counterclaim: that the alien ships could just hover there without touching the earth, due to their superior technology. This claim dies a timely death when the question “if that’s true, why do they need an airport?” is asked. 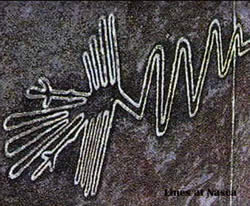 Well, okay. Let’s assume for the moment that the UFO people are right and that Nazca was an ancient alien airport. It’s got to be the worst airport on the face of the earth. Why bother building nice, long, smooth runways when you could make, say, and enormous monkey tail? I can just see the alien pilot and co-pilot speaking:

“Sir, should I just touch down at one end of the runway and slow to a stop at the other end?”
“Negative co-pilot. Today, we’ll be touching down on the left wing of that enormous hummingbird, crossing into its beak, and coming to a rest near the left shoulder. This requires several turns at sharp angles. Try not to be too rough though, the people in first class complained last time.”
“I…what?”

Fine. Let’s assume for the moment that alien pilots enjoy the challenge of enormous, irregularly shaped runways. It sure was nice of them to design the airport to be enormous outlines of animals and plants that the Nazca people could find in abundance locally. I’m just saying, you know, that the alien airport theory would be much easier to buy if one of the shapes was an outline of a Brontosaurus or Saturn or something. Monkeys and plants? I’m not impressed.

By the way: Nazca would have been a bigger airport than Los Angeles will be 300 years from now. The line drawings total up to about 37 miles of ‘runway.’ No matter how you slice it, that’s a whole lot of traffic. I somehow can’t see the demand of a Nazca-to-Stonehenge red-eye flight being great enough to require 37 miles of runway.

So there you have it. A completely reasonable, logical explanation as to how the Nazca built the lines and a thorough shooting-down of the UFO enthusiast’s counterargument. The only question that remains is why the Nazca built them. UFO enthusiasts love to ignore (or mutilate to fit their theories) this bit of information: the area around the lines is a burial area. Many of the urns and other burial materials unearthed in this area sport the same animals and objects that are represented in the Nazca lines. Does this mean the lines probably have a primarily religious significance? I’m about 5 years away from my 4-year anthropology degree, but I don’t think it’s too forward of me to say “that’s more likely than involvement of space aliens.”

In the end, I guess I was wrong. The Nazca lines very probably were built for their gods. It takes a whole lot of baseless assumption, however, to begin claiming that these gods come from other planets. Whatever the case, this whole enormous picture enigma will be solved through science, not through the hocus-pocus mumbo-jumbo with which most of the UFO community arms themselves.

First published in The Triangle 18 February 2005.