The Little Devils: Wolf! Wolf!
"What, are they children? Who maintains 'em? "
~Hamlet, Act II Scene 2 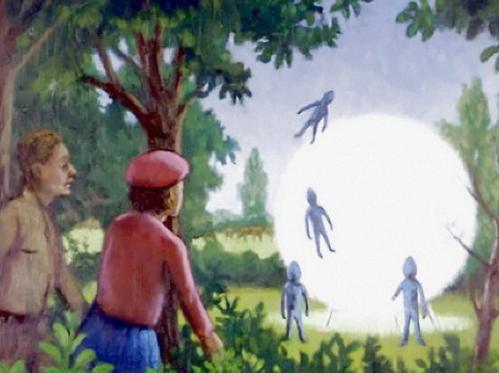 According to Francois Delpeuch, 13 at the time, he was trying to keep his family’s cows from leaving their assigned grazing area along with his sister, Anne-Marie. Looking behind him, he saw what he at first took to be four children standing behind a hedge about 40 meters (130 feet) away. Climbing onto a little stone wall and calling his sisters’ attention to them, he began to suspect that they were not, in fact, children, when he realized that they were completely black and standing next to a perfect sphere that was shining with an intense light, hurting Francois’ delicate eyes.

The four figures were standing next to their luminescent craft, which was about 2 meters in diameter. Each one was a little more than a meter tall, and completely black. The creatures had pointy heads, sharp chins, and long, pointed noses. Their arms and legs were thin and a little longer than normal, though they could not see anything such as hands or feet. The children were unsure if the creatures were completely black, a color that Francois compared to black silk, because they were wearing some sort of a suit or if that was their skin color. If they were wearing some sort of space suit, it was perfectly tailored and tight fitting.

Not recognizing his new friends, Francois called out “are you here to play with us?” The creatures immediately began to leave. Two had just been standing around, while one was bent over on the ground, and the last was holding a shiny object somewhat like a mirror. The first two began to float into the air, entering the sphere one at a time, head first. As far as I can tell it would look sort of like flushing a boneless puppet down the drain, except in air. Number three followed suit and, after collecting something that was laying on the ground, number four also flew head-first into the ship. While he was busy, though, the ship had begun flying, following a spiraling shape into the sky, and it was about 15 meters off the ground before he was able to reenter.

The ship began to glow brighter and brighter, and then sailed off into the sky, and mystery, forever. As it left, the air smelled with a stink like that of sulfur, and made a sound like a strong breeze. The children drove their cows home early that day, and for some reason the world became convinced that they had had a genuine encounter with a vessel manned by monsters from beyond the moon. 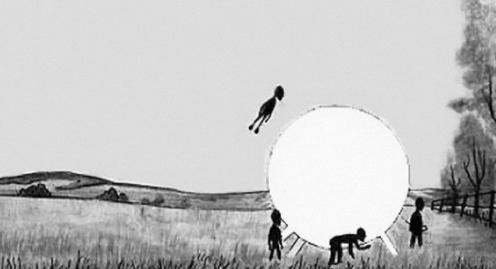 Joel Mesnard's depiction of the scene. Note it looks nothing like the other, and neither look like the landscape the children describe (behind a wall, behind some trees, 130 feet away.)

I, however, remain unconvinced. There are a number of things that don’t add up. The first involves terminology: upon returning home, the children said that they had spotted four “little devils”. The most basic version of the story is that the children saw four completely black beings fly through the air and leave behind a stink of sulfur. Why did UFO enthusiasts investigate this case? Why not the church? If one believes that this case occurred, to automatically assume that space aliens were involved seems completely unreasonable.

Second is the matter of physics. The beings flew up into the sky and entered the sphere headfirst? That must have been uncomfortable. Also, four beings, each at least a meter tall, fit into a sphere 2 meters in diameter? That must have been more uncomfortable yet. They must have been packed into the thing like clowns in a mini. According to the children’s tale, the craft flew into the sky following a spiral path. But if the creatures were concerned that they had been spotted, why didn’t they fly straight? I assume it’s because one of them had to sit on the control panel to fit into the ship.

The UFO enthusiast can, of course, fight all of these questions with the “infinity times ten” argument of logic: they’re aliens, so they don’t have to follow the laws of physics. I can’t argue with this, which is why it’s good that there are more holes in this story.
Anne-Marie says that she saw several things like landing gears on which the sphere sat in the field. Francois says he did not spot them; investigators later theorized that since he wears glasses, his eyes must be incapable of spotting objects, and therefore it makes sense that he couldn’t see them. As someone who wears glasses, I don’t understand this argument, since I can see any object anyone else can see at the same distance.

That raises the question of distance. The “little devils” were 40 meters away and behind a hedge and stand of trees. Yet the children were able to see that they had pointy noses? First they say that the creatures were entirely black, with no openings or visible skin of any kind, yet they can pick a back nose a few inches long on a black head at most a foot tall from 131 feet away? As part of an experiment, I went outside just now and tried to see a nose on the face of a person at the end of the block. I can’t even tell if the person is a man or woman at that distance, much less what their face is like.

Some reports on the internet say that investigators returned later to the field and found physical evidence, such as depressions in the dirt and burning grass. The older the document, however, the less likely I was to find this reference; as far as I can tell it’s something people added on later to make the case sound better.

So what do we really have in this case? The testimony of a 13 year old and his 9 year old sister, with no supporting witnesses or physical evidence of any kind. They claim to have sighted creatures 130 feet away, and could see their noses but not their hands. They have an appearance unlike any other UFO cases ever reported (black creatures pop up occasionally, but not with pixie-like pointed noses and skulls) and behave in a manner that is not only not reported elsewhere(flying) but seems to make no sense (flying headfirst into a vehicle.)

Ask yourself this: if two tiny children came to you with a story like this, a story which has no evidence or even logic to it, would you believe them? Neither would I.