I will never again say “that’s the strangest thing I’ve ever heard.”

I suppose it’s to be expected, but reading stories about space aliens flying around and kidnapping people leads to my hearing a lot of odd things. But every time I think a story can’t be outdone, fate seems to take it as a challenge, as a personal affront, and ensures that I come across something of flabbergasting lunacy.

The new Champion in the strange tales department is a story told by one Sandra (Sandy) Larson. Her story begins standard enough, but I assure you, at no point is her tale untouched by madness.

Shortly after October 20th, 1975, Larson called a local UFO investigator to report that she had been abducted by aliens some two months earlier, in August. She had been driving with her boyfriend and 15-year old daughter from Fargo to Bismark, North Dakota. At about 4 a.m., they heard a thunder-like noise and, looking out the windows, saw eight (or ten) glowing spheres descending from the sky. Three of the spheres hesitated, then took off; the other five remained floating in mid-air. Suddenly, they were gone, and everything seemed to have returned to normal. However, upon reaching a service station, they learned that they could not account for an hour of their time.

Later, Larson would claim that during this hour she was abducted by what must have been the inhabitant of the glowing orange spheres. One moment she was in the car, and the next she was laying on a slab, presumably in the space ship. Since she doesn’t recall, apparently, being brought aboard, we have to assume this last point; she could just as easily be in a cave, and the glowing orbs are a coincidence. But I digress.

As is so common in modern abduction cases, a figure stood over the immobile woman, performing terrible medical tests on her. But he was not the regular, gray, lightbulb-headed alien that we all know and love: she had been abducted by a space mummy made of school supplies.

Under hypnosis, she described the thing as “…with elastic bandages for a head, or elastic bandages around its head” and having metal arms. John Coleman of WLS-TV eventually drew up a series of sketches based on Larson’s claims for use in a TV documentary about UFOs. Behold the horror: 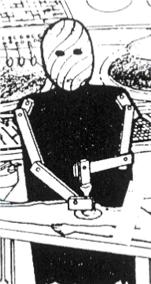 I never would have thought that by “metal arms” Larson meant “had yardsticks for arms” but that’s what the sketch looks like to me. Can you hear the sound of hysterical sobbing mixed with unstoppable laughter? If so, you’re probably in the same room as me. Pass me a tissue, please.

But it gets worse. So, so much worse. Larson is prone on the slab, at the mercy of a yardstick-man-space-mummy. What is it that he’s doing to her? Well for some reason, this nasty from beyond the moon has decided to dissect her, her child, and her boyfriend. According to Larson, they received “a complete medical exam . . . stripped naked and all parts of the body examined . . . even our heads were opened and all parts of our brains looked at ... we were dissected like frogs.”

You read that correctly. The monster stripped them naked, and then sawed open their heads and removed their brains. Larson states that after her brain was replaced, she felt smarter, as though the thing had given her gray matter a tune-up. If this really happened, and if Larson felt smarter after the procedure, I rather suspect it’s because she received someone else’s brain during the replacement portion of the examination. Either that, or the toilet paper monster cut out the lobe that controls belief in toilet paper monsters. That’s all speculation, though.
Not content with just taking the brains out of a family’s skulls, poking around on them, and stuffing them back into their head-holes, the creature also took an instrument “like a knife or cotton swab” and stuck it up her nose. This caused some soreness, and Larson later became convinced that he’d inserted some sort of nasal implant. Though she does not remember it, the creature must then have returned the unlucky trio to he car.

Suffice it to say that there are some things that make me think this story is not entirely true.
First, the space mummy: as far as I can tell, this is the most horribly unique space alien in all of modern folklore. With the little gray space men, the UFO enthusiast makes the argument that since many people report them, the reports must be real. Similar accounts elsewhere prove the reality of the subject. The creature in this tale is so unique, and so ridiculous (yardsticks for arms?) that he alone would torpedo this story for any rational person, no matter what the rest of the tale held.

But the rest of the tale has a number of problems. According to modern experts, the space aliens that are flying around in UFOs abducting people are either a)interested in some sort of breeding program, and will steal your sperm, b) the devil, getting us ready for Armageddon, or c) top-secret government storm troopers in disguise. Notice that nowhere in that list is “neurologists.” The removal of a subject’s entire brain, and the replacement of it in better shape, is something so bizarre that it should, at the absolute least, be placed in the “wait for corroboration” category. (I must note, in fairness, that amputations and reattachments, or the removal and replacement of organs, are infrequently mentioned in abduction accounts. Entire brain cleanings, however, are conspicuously absent.)

It goes on and on like this. In the margin of their reports, the people who investigated this case note that Larson had recently had an operation on her sinus performed by thoroughly human doctors, for thoroughly human medical reasons. It caused her a great deal of pain. The doctors also recommended a second treatment, which she declined. So, she was having excruciating nose problems, and then a space monster causes her further terrible nose pain? Isn’t it more likely that she was worried about the state of her nose, and those worries manifested themselves in some sort of dream, hallucination, or psychotic break? Hell, maybe she was just doing this to try and get a free medical examination of her nose.

Why did she wait two months before she regained her memory? What was it that occurred on the night of 20 October, 1975 that made her remember the events of early August? Well, NBC ran a prime-time TV movie about the Betty and Barney Hill alien abduction case called The UFO Incident, starring James Earl Jones and Estelle Parsons. A nationally-promoted, prime-time movie on the country’s largest network… could, perhaps, she have heard of it? Seen it, maybe? I thoroughly doubt that a woman’s claim of remembering an alien abduction shortly after a well-publicized movie about a famous alien abduction case is a coincidence.

But the UFO enthusiast will argue that this was a group abduction, with more than one witness, thus ensuring credibility and reliability. Not quite so. As an article in The Columbus Inquirer rather dryly states, “The boyfriend was not hypnotized and declined to be identified.” The daughter, similarly, has never made her version of the story known. We have one witness claiming three people were abducted, not three people claiming they were abducted.

As always, I can’t say what really happened to Sandy Larson. Perhaps a toilet paper school supply monster from space really did kidnap her and mess about with her brain. I guess it’s possible. But I can say with absolute, concrete certainty that it’s not the most likely explanation for her actions. Sandy Larson may be the one who had her brain chopped out of her skull, but I’m the one with the headache.