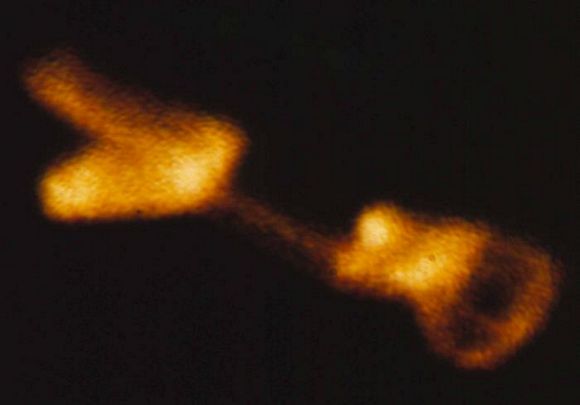 An image recorded by the Project. The majority of the lights look like little balls.

Mysterious lights are spotted over a city, dozens a day, baffling the citizens. Instead of indulging in a bit of hysterical war-of-the-worlds super exaggeration, however, they call in some scientists equipped with the latest, modern equipment, to investigate. They do so in a straightforward, honest manner, leap to no insane conclusions, and avoid the hysterical babbling of the UFO community

Yeah, I know. I was surprised too. I thought I was reading it wrong at first.

The place was Hessdalen, in a valley in central Norway. Many websites begin with the sensational “one night in December 1981, mysterious lights suddenly appeared in the skies.” The fact that sentences later, they claim that the lights have been there for decades, if not millennia, seems not to phase them. Neither does the fact that the majority of these lights are seen down in the valley by folks on mountaintops, not “up in the skies.” But I’m getting ahead of myself.

So lights begin appearing in Hessdalen. Between 1981 and spring 1983, hundreds a month would appear; then none were spotted, and since autumn 1984, perhaps 20 lights a year have been seen. If this happened in America, only one thing would happen: tales of nose implants, cattle exploding, and lightbulb headed space monsters from B-Movies doing weird things to genitals. So on and so forth.

But the Norweigans are a heartier, and apparently saner, breed. They called in a team of folks that ended up calling themselves Project Hessdalen. I guess they’re also a more utilitarian breed, at least when it comes to naming things. In America, they'd have given themselves a name like The International Cooperation Group for the Revealing of the Mysteries of the UFO Enigma. You know, TICGRMUE. Anyway, the group consisted of five scientists, and included members of the Norwegian Defence Research Establishment and the Universities of Oslo, Bergen, and Trondheim.

They pulled out all the stops when it came to equipment. They got special cameras with diffraction gratings so that, if they could get some photos, they’d be able to accurately determine exactly what type of light it was as well as what chemicals it could have come from. A seismograph to record whether the lights were connected to any sort of tectonic activity. A radar for obvious reasons, a magnetometer to determine if it was related to magnetic phenomena, and a spectrum analyzer to determine if the lights were having any effect on radio communications. They also obtained a laser to shine at the lights, as they’d heard that this would cause the lights to react. There was also a Geiger counter to evaluate radiation levels, and a device for viewing infrared radiation.
To put all of this into perspective, these guys had the equivalent of 15-inch platinum wheels on their giant science SUV.

For some time they studied the phenomenon and came up with some results. 135 reports turned out to be of known lights, and 53 were classified as unknown or, in their terms “Hessadlenphenomena.” These themselves were divided into three groups:

They took a number of photographs of them, but analysis proved inconclusive. They couldn’t tell what they were or what they were from. They recorded no radiation, though they were much too far away to read anything short of an atom bomb. The seismographs shows no tectonic activity, the IR apparatus was of no use, and the spectrum analyzer didn’t pick up anything that would interfere with radio equipment.

So basically, they came to the conclusion that these lights exist. At least we know that the witnesses aren’t just making it all up. Well, not all of them, anyway. The scientists wrote their report, and it in 1998 they set up a remote monitoring station that has yet to provide any important evidence. As far as the science community is concerned, the Hessdalen lights are still mysteries.

Of course, they’re not mysteries to the UFO community, which had made up their minds long before scientists published their findings. The lights are, in fact, spaceships containing monsters from beyond the moon here to do horrible, horrible things to your reproductive system. Or secret government airships ready to do the bidding of the New World Order. Etcetera ad nauseum.

Looking up the subject on the internet, you can find any number of insane claims. Apparently, the scientists detected a huge invisible spaceship that was bringing aboard and disgorging the balls of light, which were really scout craft. That’s news to the scientists. You can also find a whole buffet of broadly worded claims, such as that the scientists have found “stunning proof” of “UFO activity.” They’ve uncovered the secrets that will blow the lid off the whole UFO conspiracy, so on and so forth.

What it all boils down to is this: Hessdalen was the sort of case that was made for scientists. The UFO community is always claiming that they handle things in a thoroughly scientific manner, and that they deserve more funding because UFOs are an area of legitimate research. And yet, the one time that unaffiliated, actual scientists actually perform genuine research, they find nothing to suggest any sort of otherworldly shenanigans. Where are the ridiculous robots? Where is the human breeding program? Where is the babble about crystal energies powering futuristic engines? Oh well.

More and more evidence, and none of it points towards space monsters.