"Go charge my goblins that they grind their joints with dry convulsions, shorten up their sinews
w ith aged cramps, and more pinch-spotted make them than pard or cat o' mountain."
~ The Tempest, Act IV Scene 1 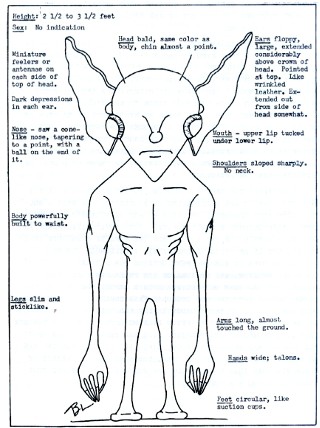 One of the reasons that I write this column every week is to repent for a misspent youth. As a child, I read every book on the paranormal that my local library had at least twice. When I became of driving age, I raided the local mall’s bookstores for hard to find books on UFOs and ‘Cryptozoology.’ When I got my first computer capable of reaching the internet, I submerged myself in stories of the otherworldly. This was, mind you, when AOL cost $9.95 an hour and phreaking was only slightly out of fashion. So I like to relate to others all the fascinating stories I read about, though with a disclaimer that I never got as a child. Filtered through the colander of common sense and reason, so to speak. Therefore, it is my great pleasure to write to you about the story of the Hopkinsville Goblins.

The date: August 21, 1955. The place: a farmhouse near the town of Hopkinsville Kentucky, in Christian County. The farmhouse was inhabited by a Mrs. Lenny Langford, her son Cecil “Lucky” Sutton, and his family. They were sitting down to enjoy their evening meal along with some friends from Pennsylvania when Lucky Sutton, like Jack and Jill before him, decided to go to the well to fetch a pail of water.

Unlike Jack and Jill, he watched as a metallic craft floated soundlessly overhead, fitting the most typical of typical descriptions of a ‘flying saucer.’ (On the internet, it is claimed that he said it “shone with all the colors of the rainbow,” but none of the early newspaper reports or books I’ve seen on the subject mention that. It’s most likely a fabrication of the UFO community trying to spice up the encounter.)

Lucky Sutton, being apparently very hungry, returned inside and chose not to go investigate the object, which landed in a field about a ‘city block’ away. Accounts are unclear: either a man was sent out to investigate, whereupon he discovered the craft was being tended by 15-20 ‘Little Men’ or the Little Men were spotted walking in a group towards the farmhouse.

The Little Men are the source of many sleepless nights in my youth: about 4 feet tall, huge heads without necks, long arms with enormous hands that nearly drag on the ground, and huge elephant-like ears. Their eyes were said to glow in the dark and be the size of grapefruits. In the early news reports they’re referred to as Little Men, though after time they took on the name of Goblins. They wore shiny suits that were described originally as “like metal plate” but over time became described as like NASA astronaut suits. I should also mention that it is no longer vogue to call them the "Hopkinsville Goblins"; UFO enthusiasts prefer the term "Hopkinsville Entity," to try and make it sound more mysterious than it actually is.

Apparently, the Suttons are a hardcore bunch, and after spotting the Little Men they went back to enjoying their dinner, though they did bring their arsenal to the table: a shotgun for Lucky and a .22 caliber starter pistol for his friend from Pennsylvania. They remained unconcerned until an enormous head peeked in the window. Lucky fired on it, point-blank, with his shotgun, and the creature was blown back into the yard. After a moment Lucky watched, stupefied, as the creature got up and scampered away on all fours like a dog (or, more accurately, a mountain gorilla.)

One of the other men went outside onto the porch to investigate. Apparently, another Little Man had climbed onto the roof; when the unfortunate fellow came to the edge of the porch the creature swung down and grabbed at his hair with an oversized hand whose fingers ended in claws.

Harry Trumbore's sketch of the creature

The man managed to get himself free, and if he didn’t crap his pants he’s more stalwart than I. He retreated indoors and the Suttons spent the next four hours shooting at the Little Men, who popped up now and then to peek in the windows and seemed to amuse themselves a great deal by walking on the roof. At about midnight, the family spotted their chance, piled into two cars, and drove to the police station.

Apparently the crime situation in Kentucky is well in hand: upon seeing how terrified the Suttons were, a posse consisting of 4 city police, 2 state troopers, a deputy sheriff, and 4 soldiers went out to the farm. They found nothing odd, and no sign of the Little Men. The only excitement came when a soldier stepped on a cat’s tail, which let out a yowl that almost got it riddled with bullets. The police eventually left, and the Little Men came back, vanishing just before dawn. Do you hear someone screaming in pure, undiluted terror? If so, look around: it’s probably you.

This is the story that scared the ever-lovin’-hell out of me for years as a child. If you replace “went to fetch water” with “got his dumb ass lost in a cornfield” it seems to be a lot like the movie Signs, which had me on the edge of my seat until it committed the unforgivable sin of actually showing the monster I was supposed to be scared of.

Anyway, put your mind to rest: something happened to the Suttons, but it wasn’t an alien invasion. Over the course of the investigation, the posse found the Sutton’s neighbor, who reported hearing 4 gun shots that he had thought were firecrackers. Sutton’s claim of expending almost a battalion’s worth of bullets seems either exaggeration or pure fiction in the face of this. If a brutal all-out trench battle against aliens was going on, the neighbors would have reported it, especially if it went on for 4 hours. This is rural Kentucky, not modern West Philadelphia; hours of constant gunfire would have been considered a little odd.

Add to this the fact that the investigators found a hole in the screen where the first shot was fired at a Little Man and recall that shotguns don’t leave little holes. The screen, the windowframe, a portion of the wall, and the Little Man’s head should have been lying in pieces in the yard, yet there was only a small hole in the screen. Perhaps, in fact, the opening shot was fired from the .22 pistol. This makes the alien’s invincibility substantially less impressive: a good flannel shirt is thick enough armor to stop a .22 caliber bullet. The only thing one of those would stop is a rat.

This was 1955, before the invention of LSD (my personal favorite explanation for insane UFO claims), but not before the invention of jerks. Were the Suttons the victims of an elaborate hoax? It seems that every move made by the Little Men was calculated to scare the daylights out of them and nothing more. If aliens were really coming to earth, I like to think of it like a scientist going into the congo to study gorillas: we might capture and dissect a few, or sit there and watch, but I can’t see any scientist trying to scare a gorilla for any reason.

Assuming that the sheriff reports are accurate, and that this whole thing isn’t a family-wide prank (not something unheard of in the course of humankind) there’s still more evidence that it was a hoax than anything else. The Little Men were reported to be able to float a few feet off the ground while remaining still. Now, I’d wager the same laws of physics applies to me as do to inhabitants of a world around a distant star, so neither of us can fly. But a little bit of string, a dummy, and some hatred can convince a bunch of hillbillies that I could.

This story, over the years, has gained a lot of details. The modern UFO enthusiast claims that it happened in a way at least partially at odds with the original newspaper and police reports, the story twisted and exaggerated. They also claim that this is smoking-gun proof of alien involvement in human affairs. I’ve tried to stick to the basic facts as they were quoted in the earliest available data, but I hope that it is as clear to others as it is to me that this story is a wonderful thing with which to scare children, but more likely than not the product of (one way or another) diseased minds. 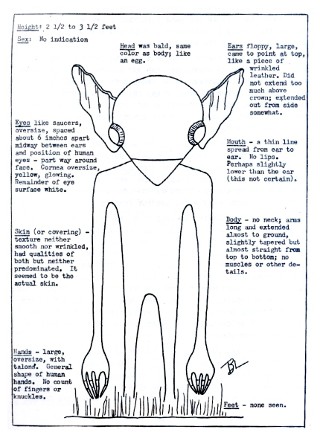 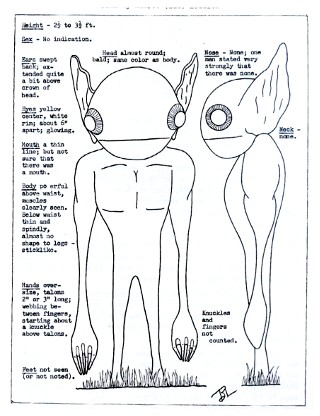 First published in The Triangle on 5 November 2004.

"Hi there. Are you aware of the explanation on wikipedia that the event is a result of an encounter with mis-identified Great Horned Owls? Wikipedia mentions only 2 being seen together at once but that's the thing with these stories. I'm picturing Dr Smith from Lost in Space telling the story so that 2 becomes 15-20 by the end of the story hehe. Take care, Brian Edwards."