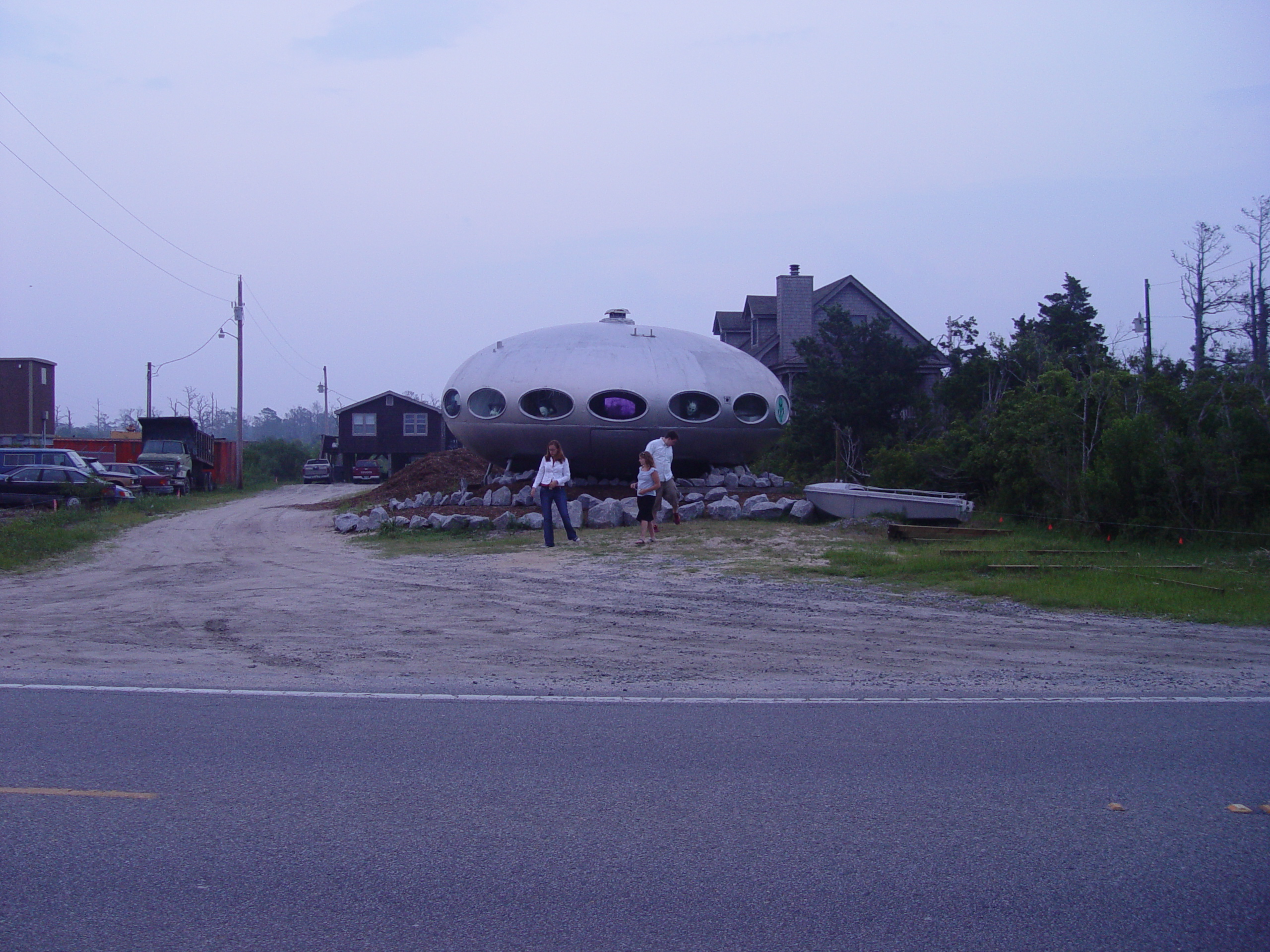 There is a place on the Outer Banks of North Carolina called, if I recall, Hatteras. Whether or not that’s the name of the place isn’t important; what is important is that as you drive south along the main road, on your left you will pass a UFO.

You can’t imagine the torrent of confused obscenity that came out of my mouth the first time I saw the thing. I’d spotted it out of the corner of my eye and had half-convinced myself I didn’t see it because UFOs don’t exist, but then I became suddenly disgusted with myself for doubting what I’d seen because of preconceived notions. It was sort of a complex reaction, like the one that they use to make ammonia. Suffice it to say that I didn’t say to the driver of the car “oh, look, a spaceship” but rather began babbling out half-formed phrases mixed with the crude language of mankind’s baboon ancestors.

On the return trip, we stopped and took a look. It wasn’t, in fact, a flying saucer. It was a house that just happened to have been designed to look like a flying saucer. We took some pictures, and in retrospect I look very unhappy in them about the whole affair. As we left, I copied the address of the house, intending to mail the owners and ask them why in the world they had a spaceship house. But the internet was too fast for me; shortly after putting the pictures up on this site and asking for more information, I received in the mail some photocopies from a book on architecture that sent me in the right direction: I had unwittingly stumbled upon one of the last surviving Futuro Homes.

The story of the Futuro home is one that is quite similar, at least in guiding elements, to the stories told in the 1950s by the ‘contactees’ who claimed that aliens were sharing their secrets with them. For instance, naïveté, grand hope for the future of mankind, and a lack of knowledge of science and marketing. But I’m getting ahead of myself.

The year was 1968, and Finnish architect Matti Suuronen had just completed designing a new kind of home. Shaped like a fat flying saucer, it was 36 feet in diameter and made entirely of lightweight plastic: sixteen panels of glass-reinforced polymers with an insulating layer of polyurethane. The windows for the home were made of a plastic called Perspex. The space was designed to house eight people in comfort: it had all the amenities of modern life (a kitchen, central fireplace, and bathroom) and had a lot of fashionable, built-in furniture, such as comfy seats that folded down into beds to save space. As far as I can tell, the only comparison to modern architecture I could make would be to tell you to imagine a round trailer home with lots of windows, inhabited by some fashionable UPenn student whose parents pay his rent so that he can buy all the trendiest furnishings. 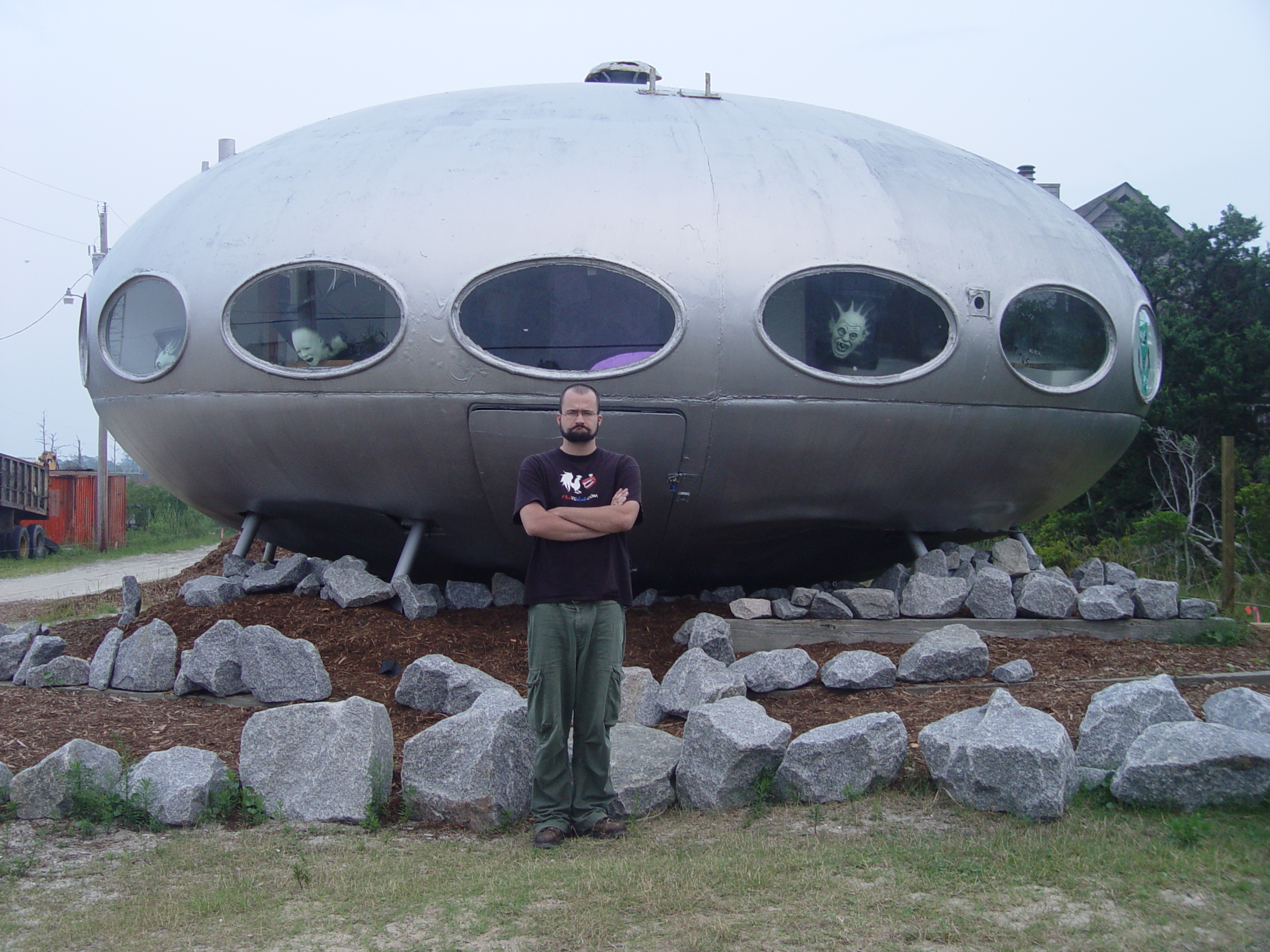 This may be the best picture of me that has ever been taken. Regardless, I look rather unhappy, and I apologise to all Futuro owners for that. I didn't know.

The whole ellipsoid structure sat atop a framework of steel legs and had a sort of hatch as an entrance, which I am sure led to no end of hilarious parodies of The Day The Earth Stood Still by the owners. It was originally designed to be a trendy ski home: made of plastic, the entire house was light enough that it could be assembled and lifted by helicopter to a…uh… parking spot where the home would rest. Preferably, I’m sure, a parking spot near the slopes.

This is where that vague comparison I made to the Contactees comes in: Futuro homes weren’t just going to be a new style of house. They were going to be the salvation of the world’s housing problems. Easily made of cheap materials, they hoped to make the sprawling slums of the third world look like 'space aliens get in free' night at the drive-in theatre. And the design permeated every level of society; not just for poor government project housing and for rich folk’s ski retreats, the designers had plans for the rest of us. Hotels were designed that were nothing more than Futuro houses stacked on top of each other in columns connected by a central elevator. Entire neighborhoods were dreamt up featuring these shiny, donut-looking things. Alas, it was not to be.

Someone had it out for the Futuro design, and I think it was a higher power, because bad luck followed to things everywhere they went. In America, at the press conference to announce the design, a pre-assembled Futuro home was supposed to be flown in by helicopter. The helicopter did not work, however, and all the possible replacement helicopters were 8,000 miles away fighting the communists.

But that’s wasn’t all. The oil crisis of 1973 unequivocally killed the Futuro scheme. Plastic was now much, much more expensive than it had been, and business tanked. Only 96 homes were made; half in Finland and half scattered amongst 24 other nations. 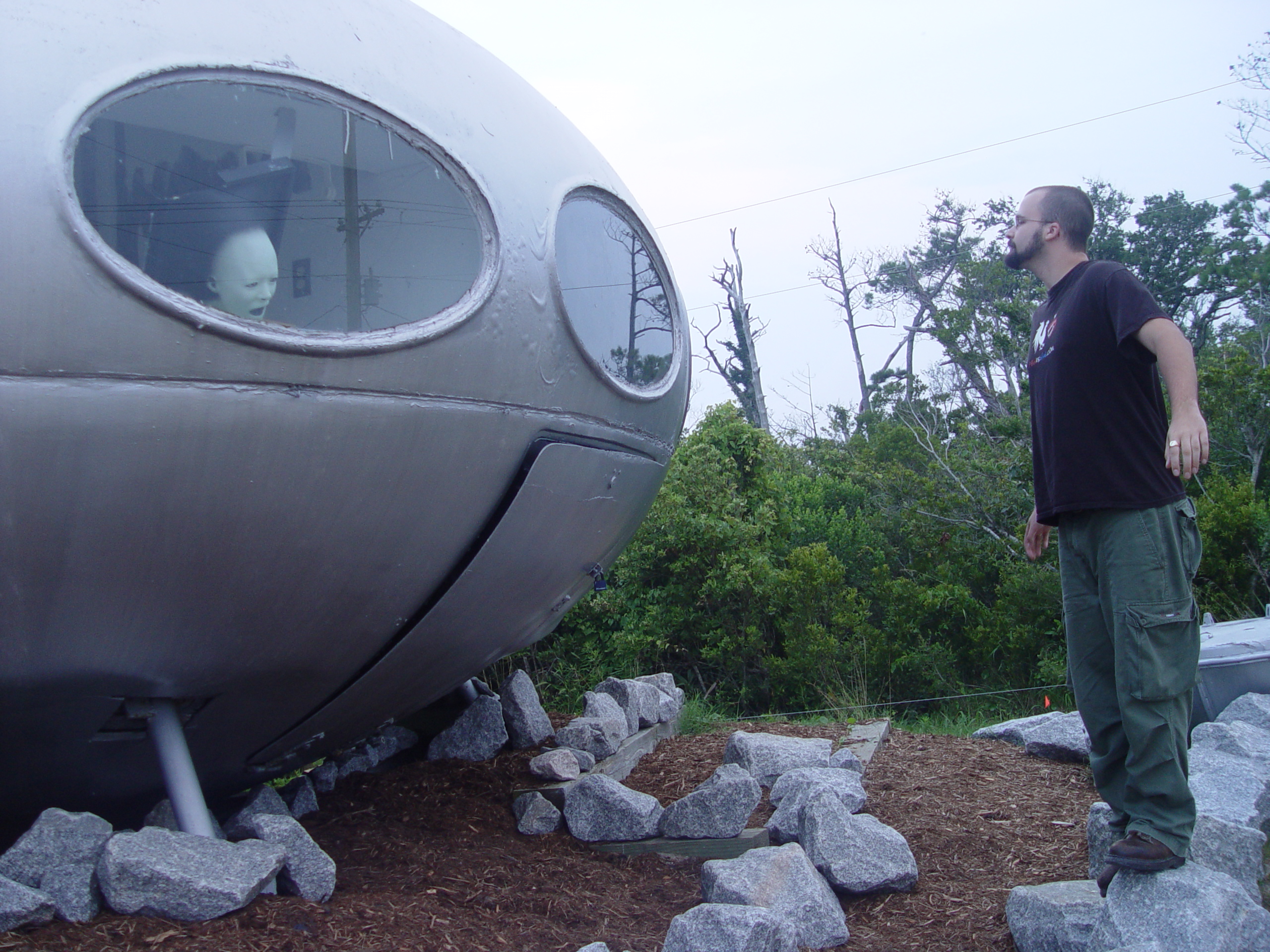 Curiosity finally got the better of me.

So that’s what I’d spotted as I half-stepped down the road in North Carolina: a Futuro home. Now knowing the name of the design, it’s easy to find on the internet; apparently, the place used to be a hot dog/ice cream stand, but a recent hurricane damaged it somehow. Now it’s just sort of hanging out on the side of the road. I’m told, confidentially, that the food there was “okay,” but eating in a UFO made it “worth it.”

Today, the Futuro house is a lot like Edsel car: not many have them, but the few who do are hardcore, likely to know the serial number of every part, the location of every nut and bolt, and so on.

The whole story of the Futuro home, and my encounter with one of them, is a little complex, even to me. It was at first mildly irritating to me that someone would take their crazy UFO spaceman beliefs to the extreme of building a crazy UFO spaceman house, but now I can see I was wrong. The Futuro home wasn’t something cooked together in a backyard out of scraps by a crackpot; it was a pretty cool shot at solving the world’s housing problems combined with some slick marketing that never really panned out. I ask all those involved with the Futuro homes to not take my grimace in the photos of me in front of the Hatters Futuro personally.

Special thanks to Martin Kottmeyer for mailing me the photocopies of the pages of an architecture book discussing the Futuro homes.

Special thanks to Karen Maziarz, photographeress extraordinaire, for taking the photos.