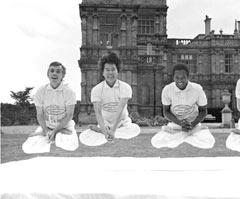 They don't exactly look like they're floating, do they? Why are they all grinning, and some are hunched over? And how do they expect to stop rocket attacks?

For their size, they are incredibly powerful. A handful of them in the skies above the Middle East would ensure a permanent end to rocket attacks and the need for large-scale military operations. They are objects of almost miraculous potency, able to liftoff from any locale, and impossible to destroy with conventional anti-aircraft weapons.

The Yogic Flyers are a group of people bent on convincing others that, by harnessing their internal spiritual powers, they can not only fly, but they can create invisible shields of total invincibility. According to Alex Kutai, who calls himself the “Prime Minister of the Peace Government of Israel,” a group of devoted Yogic Flyers, if the Israeli government were to recruit a mere 265 men and women trained in “Transcendental Meditation,” the spiritual process through which one attains wondrous powers, they could create a barrier that would destroy not only the primitive Qassam rockets with which the Hezbullah has been peppering Israel, but also the more advanced Katyusha rockets. And if every government had such a group, every nation would be invincible, and war would be a thing of the past. We could beat the swords into plowshares, so on and so forth.

That’s a beautiful story. There’s nothing I’d like more than a world at peace. But this is just a story; if peace is to be attained, it is not through the likes of the Yogic Flyers. Here’s why.
When you hear a story about a subject with which you are unfamiliar, one of the easiest tests is the “science jargon” test. If a person talking about his subject misuses scientific terminology, uses terms that have no real connection to his topic, or mashes science words together to make new phrases, that usually means that the person is just trying to make what he’s doing sound legitimate by adding meaningless, though perhaps convincing, phrases.

According to Alex Kutai, during transcendental meditation a Yogic Flyer connects to the "source of all energy and intelligence - beyond any thought and at the same time the source of all thought." He claims that this is what physicists call “the United Field of the Laws of Nature.” If you’re wondering what this paragraph and the previous one have in common, let me assure you that there’s no such thing as “the United Field of the Laws on Nature.” At least, not if you Google the phrase or look in the indexes of three physics books. Perhaps he meant the Unified Field Theory, from quantum physics; it doesn’t matter. He’s just using this science-y phrase to try and make his ideas sound better.

This is like a story you’d see on America’s Most Wanted. The Yogic Flyers have already abused science, but they’re not through yet; they’re going to keep on savaging it until they dump its lifeless husk in a ditch near the interstate. According to the Maharishi University of Management (MUoM), a Flyer group:

That sounds impressive. It’s not. There are several things to note about the “scientific studies” that were conducted. First, a majority of them seem to have one author in common, a fellow named Orme-Johnson. If you’re going to convince a person in the scientific value of something, what is required is independent verification by many scientists. Not a slew of papers which all seem to come at least partially from the same fellow.

Second, of the journals listed, there are no journals of hard science. Psychology journals, journals of crime statistics, and such have published these papers. Since they’re outside my field, I don’t know if these particular journals have a good or bad reputation, but I do know, for certain, that the Yogic Flyers are trying to say that their practices have been scientifically approved, when in fact no such thing has occurred. The Yogic Flyers are, at the absolute best, misrepresenting the facts, and at the worst, are no more than con men.

Pseudoscientific graphic from a Yogic Flyer website. It might look good to non-scientists, but it's pure baloney. How in the world do you hook an EEG up to a man that's hopping around on the ground?

But let’s ignore all this. Let’s assume that the Yogic Flyers really can tap into some great collective spiritual power, whatever it may be called. What benefits do they get from this? Well, according to the MUoM, there are three stages of Yogic Flying. In stage one, the practitioner sort of hops around like a frog. In stage two, they can float in the air for minutes at a time, and in stage three they enjoy total, superman-like mastery of the skies, as well as invincibility, longevity, and so on. They claim that, as of today, only the first stage of Yogic Flying has been seen, investigated, and demonstrated.

Think about what that means. They’re saying that this Transcendental Meditation technique will allow them to fly and create world peace someday, but that they haven’t gotten that far. All they can do now is hop around like frogs.

There are many, many pictures of people practicing Yogic Flying or levitation, where they’re sitting in the lotus position and seem to be hovering above the ground. These are nothing but hoaxes. The person sits in the lotus position, hops off the ground using no force more supernatural than their muscles, and some clever person snaps a photo at just the right moment. That’s the most paranormal thing the Yogic Flyers can do. I’m not impressed. I can do that.

When I say “I can do that” I should add a note of warning. If you look at pictures of Yogic Flyers levitating, you’ll notice that they’re usually right above a cushion. There’s a good reason for this. When I tried to stage a Yogic Flying photo, just like genuine yogic flyers, I did so in my apartment, which has hardwood floors. I hopped into the air, slapped at the camera, and returned to the earth, landing squarely on my reproductive organs. Thus ended my attempts at taking a Yogic Flying picture. The day I see one of those photos where the Flyer is sitting above a concrete floor is the day I’ll believe. Those cushions alone prove, at least to me, that there’s no “gentle floating” going on. Just some bozo hopping around that doesn’t want to squash his genitals. 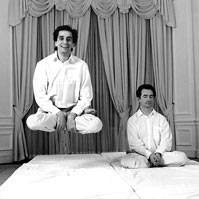 Notice the thick, comfortable-looking cushions beneath that man? It's so he doesn't suffer substantial groin injury when he lands.

So what have we got? A lot of grand claims, a huge amount of effort expended by the Flyers at convincing the rest of us that they are having scientifically verifiable experiences, and absolutely no results. Their technique could lead to world peace, but not yet. I have to wonder how they know what stages two and three are like if no one has gotten past stage one, but that’s not the point.

The Yogic Flyers in Israel, championed by Alex Kutai, claim that their Transcendental Meditation is responsible for creating a rocket-proof shield around the hotel in which 30 Yogic Flyers were staying. Basically, they claim TM must work because otherwise, they’d have been hit by rockets. I’ve never taken a course in form logic, yet I can see that this is a ridiculous claim; there are millions of people in Israel that have not been bit, either. Hell, I haven’t been anywhere near a rocket attack; you might as well claim that my love of buffalo wings creates an impenetrable shield against attack. Other things that my love of buffalo wings is responsible for:

- Creating an impenetrable shield against the contraction of Gonorrhea
- Creating a field that protects me from being hit by lightning, meteors, and trains
- Making my skin totally bulletproof
- Granting me the ability to see evil spirits. Hey, why not?

Clearly, this look at Yogic Flying has taken a turn towards mockery. But my claims are just as valid as theirs are. I’ve never contracted Gonorrhea, been hit by lightning or fatally shot, and no one can prove I don’t see evil spirits. If they can enter some sort of mental realm through meditation, surely I can do the same thing by craving the delicious, smoky, spicy, sweet flavors of a tray of Philadelphia buffalo wings.

Anyway, the Yogic Flyers spend a huge amount of energy trying to persuade the public that they are practitioners of a legitimate art, but we’ve seen that most of that persuading involves bending the truth, terrible reasoning, and flat-out lying. So why would they do it?

It’s the money, of course. It’s always the money. You don’t learn to be a Yogic Flyer for free. Classes, seminars, books, videos, and all sorts of related doodads cost money. Somewhere in the world right now there is a handful of people that are very wealthy, solely because people don’t do enough thinking before they decide to become some sort of spiritual astronaut and hand over all of their cash. Do you think that “the Maharishi University of Management” is just a fancy name? It’s not. It’s a real institution, and it enjoys every dollar it takes from simpletons. The gurus of Transcendental Meditation claim that their technique allows people to exist in a state free of thought; I argue that some already exist in this state when they sign the cheque.
Yogic Flying is a scam. The road to world peace is through diplomacy, economic interdependence, and, in a few extreme cases, overwhelming firepower. Loonies that think they can fly around aren’t even in the picture.


All images accompanying this article are from victorybeforewar.com.