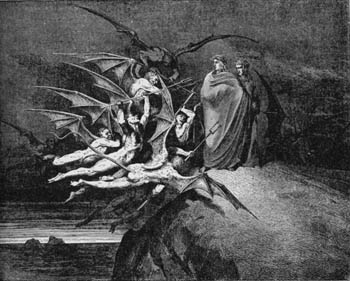 "And there were Giants in the earth in those days, and also after that, when the sons of God came unto the daughters of men, and they bore children to them, and they became mighty men which were men of old, men of renown." Genesis 6:4

Sometimes I lose faith. Not in any sort of religious context, but faith in mankind. This isn’t unexpected; if you read the emails I get with some regularity from UFO enthusiasts, you’d turn into Tyler Durden’s evil imaginary friend. And Tyler was already someone’s evil imaginary friend, so that says a lot. But every once in a while I tilt the other way and begin to think that logic and reason are beginning to turn the tide against irrational thought, the occult, and other such lunacy. That’s why I’m following a certain trend with some enthusiasm: people who get abducted with space aliens are more and more often claiming that the little monsters come not from beyond the stars, but rather, they are demons and devils fresh from the bible.

At the end of the 19th century, people reported spotting UFOs that looked sort of like super-blimps. The idea at the time was that airships had been invented by some backwoods tinkerer, who for some reason was often named Wilson. The craft had propellers, wings, huge bladders filled with gas, gears, or any number of other perfectly human accoutrements. The reports of “encounters” with these UFOs are fairly benign; occasions such as a young man reporting that a ‘martian ship’ had crashed in a forest (it was a hoax) were very much the minority.

In the 1950s flying saucers acted very strange. They usually looked like rockets, and did things such as trail smoke or sparks. Some of them even had propellers. And not just some on the fringe: no less than J. Allen Hynek held a 1952 case from Kansas that involved a flying saucer sporting an array of tiny propellers in the highest regards.

Many of the people who spotted them assumed that they were new Air Force vehicles or, much more sinisterly, secret Soviet superweapons. That, of course, led the government to attempt to silence UFO sightings so as to not give the Reds any sort of advantage, which conspiracists have been citing for decades as proof that the government is in league with monsters from space.

Today, the vast majority believes that UFOs are the province solely of creatures from realms beyond the sky. When it became evident they weren’t American ships, they suspected Russian ships, and now that that’s unlikely, our eyes have turned upwards.

Thousands upon thousands of people claim to know exactly where UFOs are from, why they’re here, and how they work. A quick survey of what it is that powers UFOs reveals a flood of technobabble that should make even the most scientifically inept wince: warp drives, atomic power, ion drives, gravitational repulsion, differential accumulators, tachyon drives, zero point energy, free energy… the point is, it’s like my high school physics textbook had sex with an episode of Star Trek and they threw their baby’s first diaper into my eyes.

As the technology of the era became more and more advanced, the technobabble of the UFO field became less and less plausible. I doubt there’s anyone left that believes UFOs are powered by ‘atomic jet engines’ anymore. Our technology quickly outpaces what at one point sounds impressive, and so better theories must be invented. But the UFO enthusiasts are one-upping us: science has been giving them such problems that they’ve moved beyond science completely.

A growing number of people believe that UFOs are not physical entities. In a previous article I recounted the story of a man who, while being abducted from his bed one night, cried out the name of Jesus, and the aliens dropped him, terrified, and flew away, never to bother him again. Many well known abductees have told such religious tales, such as Betty Andreasson, who met an alien named The One who stressed the importance of the Gospel, Truman Bethurum, who visited the planet Clarion, inhabited by devout Christians, and a woman in Australia who reported being attacked by person-shaped beings that had no color to them and were naught more than the pure distilled essence of evil.

The theory, in general, goes something like this: As the end of days approaches, the Devil will marshal his forces and send them out amongst the world to confuse the hearts of man. If one believes that UFOs exist, that means that they are unexplained by science. And what can’t be explained by science? The Devil. Therefore, UFOs are the forces of the devil. The fact that the space monsters inhabiting UFOs lie, kidnap, and abuse human beings certainly leads credence to that theory.

For instance, Ba’alzebub was a name sometimes used in the bible to refer to the Devil. In ancient Hebrew, it means “Lord of those that Fly” or “Lord of the High Places.” Therefore, the Devil must reside in space. I’m not exaggerating. That’s literally the train of thought that those that believe in this theory take. They also point to the story in Genesis of the Nephilim, the giants that inhabited the earth before Adam. Supposedly, Nephilim originally meant “fallen angels” (that is, the Devil and his compatriots.) They tried to reproduce with regular humans so as to (somehow) prevent the eventual birth of Jesus, but their offspring were hideous “evil souls with human bodies that began to corrupt and destroy the human race.” Therefore, the small gray monsters that abduct people in the middle of the night and bring them into space ships must be the descendants of the Nephilim.

Far be it for me to say that these are two incredible leaps of faith. The bible describes monsters, therefore those monsters must be the space aliens we know and fear today. The bible sort of obliquely states that the Devil keeps track of things that go on in the air, therefore, he must currently live in outer space. That’s what it boils down to. I’ve never taken a course in formal logic, but let me take this opportunity to say “oi vey.”

When taken in the context of overall UFO history, it seems to me pretty obvious what is going on. Every time someone comes up with an idea of what UFOs are, they have to keep evolving it to stay ahead of science. Originally flying saucers were from Mars or Venus, and they were here for war. When we figured out that wasn’t possible, their origin kept moving farther and farther into the sky. Now it has transcended the sky entirely and moved into a spiritual realm.
The UFO enthusiasts are giving up! This is the equivalent of saying “no times infinity!” when you were a little kid. Science shot down so many theories about where UFOs come from, that they decided to get a theory that is absolutely separate from science. Science can prove nothing about the divine, therefore, it can never prove this theory wrong. The UFO enthusiasts won the battle of one-upsmanship, and the more people that flock to this banner, the more it seems to me that logic and reason has won the war.