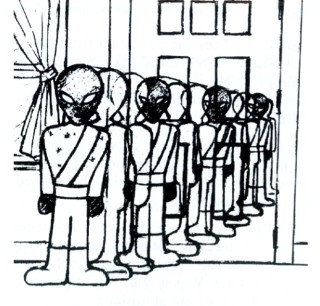 Betty Andreasson's drawing of an alien coming through her wall

There are, every once in a while, stories that stand out for some reason. Perhaps they are well told, or have clever twist endings, or provide some sort of sorely needed moral guidance. The story of Betty Andreasson stands out mostly because it is one of the strangest things I have ever heard, and I would not feel that I would be exaggerating were I to call it the pure, undiluted, distilled essence of weirdness.

Betty Andreasson, in 1967, was not the kind of person you’d expect to see in this column. A housewife in New England, she lived a fairly normal and uneventful life, until one day when a surprise visit by unexpected guests thrust her into the limelight of the UFO enthusiast community. As she stood in the pantry, there was a sudden power outage and, just as suddenly, a red light began to shine through the windows of the house. Moments later, several of the standard lightbulb-headed, big-eyed, no-nosed, gray little aliens entered the room by passing straight through the wooden door. They were four feet tall, except for one of them who seemed to be a leader, who was about a foot taller. They all wore military-type blue overalls with some sort of sash or lanyard across the chest, and wore a badge with the figure of a bird on their sleeves. Despite the fact that they wore heavy boots, they did not walk; they floated a little bit off the ground.

The shorter aliens went about the home and put her large family (her 7 children and her parents) into a state of suspended animation. For obvious reasons, Andreasson became afraid that the aliens were hurting her kinfolk, and an alien was nice enough to ‘revive’ one of Andreasson’s daughters, let the daughter say that everything was okay, and then freeze her again.

Andreasson, for some reason, felt a feeling of peace and friendship towards these kidnappers from outer space, and went outside with them to a small flying saucer, which took her to the ‘mother-ship.’ There she was subjected to the regular gamut of tests, experiences with odd equipment, a physical examination, and some sort of minor surgery that went from being extremely painful to a religious experience with great speed.

Here’s where things get a bit strange. At some point, the alien beings communicated to her (telepathically, of course) that they shared her devout love for our Lord and Savior, Jesus Christ, and that he would be coming back fairly soon. They showed her an image of a Phoenix rising from its own ashes, which was meant to symbolize humanity’s ability to rise from the ashes of its own destruction which, apparently, was due to happen sooner rather than later. The beings then led her to a giant door, wherein lived a being that Andreasson has taken to calling ‘The One.’ He imparted some great, secret knowledge to her that, apparently, she is not allowed to recall under hypnosis.

After her meeting with The One, things got back onto the normal UFO storyline. She was taken back to her family about four hours later, had her memory erased, and neither she nor her family remembered any of it.

Several years later, at what Andreasson would later claim to be what the aliens decided was the appointed time for her to begin preaching her tale of space-salvation, she began to suspect that something odd had happened to her. I find it not unimportant that this ‘appointed time’ was shortly after reading an article in a tabloid magazine about UFOs. She wrote a letter to a group of UFO enthusiasts who filed the letter away until some enterprising researchers, looking for unsolved cases in their neighborhood, found it and began investigating. They brought with them all the tools of their trade, which is to say a hypnotist and a distinct lack of cynicism as to the reliability of witnesses.

Over the course of hypnotizing Betty Andreasson the hypnotist, one Raymond Fowler, became convinced that he too had been abducted by space aliens. He went on to write five books on the subject, all of which are along the general lines of the mainstream UFO story (breeding program, master race, so on and so forth) but with a healthy dose of a sort of Star-Trek-meets-Seventh-Heaven religious message.

There are a couple of things that seem odd to me about this case.
First, although people often equate their ‘alien abduction’ with a religious experience, I don’t think I have ever heard anyone claim that space aliens subscribe to a specific set of human religious beliefs. Well, other than Mormons, though since I don’t know much about their relationship to the planet Kolob, I say this mostly in jest.

Second, the description of the aliens. Why they would wear heavy boots when they float through the air, other than for reasons of sheer style, is beyond me. The bird insignia on their sleeve is also something that, while aliens are occasionally said to be wearing clothing, stands out as odd. Not only do the aliens look a fair deal like humans, but they share similar taste in clothing and, on their home planet, have flora and fauna that apparently closely resemble that of earth’s. Not impossible, mind you, but odd. It should be further noted that the outfit she describes the aliens as wearing was a fairly common motif in sci-fi movies and television shows of the day: for some reason, travelers from beyond the stars like to dress like US Air Force mechanics.

The timing of Andreasson’s revelation that she is a special person, an instrument through which the aliens want to spread their holy message of peace and love in Jesus, strikes me as odd. Between the time of her alleged abduction and the relevation, she not only went through a divorce, but two of her young sons were killed in an automobile accident. This is not something of which I want to make light in any way, shape, or form, but I hope the general public will forgive me for saying that if only after living through severe emotional trauma you realize you were abducted by aliens, I am somewhat suspicious as to the exact nature of the incident.

There's another wierd thing about Andreasson's tale. Over time, her description of the aliens that jumped her have changed. The early pictures, drawn before the movie Close Encounters of the Third Kind came out, showed aliens with eyes that had whites and pupils. The later drawings show aliens with entirely black eyes. The first three pictures above (left to right) were drawn in 1977; the two on the right were drawn in 1980, after the film came out. The aliens went from having regular eyes to the all-black type of eyes that were featured in the film. That doesn't mean she was influenced by popular culture, but it certainly does raise a number of questions.

People claim that this is an extremely important case because later Andreasson’s children acknowledged their own memories of being abducted by flying saucer people. The mainstream UFO story now has it that individuals are not abducted; whole lineages are abducted. This is for reasons of the alien breeding program with which they shall create a master race to supplant humanity as the inhabitants of the earth; they like to follow certain genetic strains, so on and so forth.

My explanation is much simpler and does not involve people from beyond the stars and their exotic sexual deviancies. My father was an engineer. I am an engineer. My sons, if I ever have them and if they know what is good for them, will be engineers. I’m not part of some space-person breeding program; it’s just that, during my formative years, my home was a very scientific-y sort of place. It should be no surprise that in being raised in a household with strong scientific leanings, I became interested in science. The same can be said about UFO enthusiasts. If you’re raised in a home with someone interested in UFOs who later decides they were the victim of outer-space kidnappers, it doesn’t take a brain surgeon to see that you will probably think along the same lines. Naturally, in true Romeo and Juliet style, children don’t always believe their parent’s beliefs, but as a rule of thumb, I find very little merit in the breeding program explanation.

In the end, the UFO enthusiast will say that since there is no proof that Andreasson is lying, confused, or insane, she must be telling the truth, lucid, and completely sane. We differ in that I believe since there is no proof that she’s telling the truth, is not confused, or that she is sane, one way or another her story must be false. No matter which position you take, you must admit that the absolute and total lack of irrefutable physical proof, aside from taking her word for it, certainly raises potent doubts about the accuracy of her claims.

First Published in The Triangle, 25 January 2006