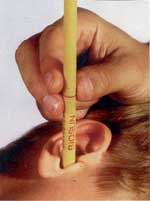 So there I was, minding my own business as I walked the streets of New York City. By minding my own business, of course, I mean trying to keep an eye on every single person within a hundred feet of me, and it was due to this unnatural state of alertness that, as I passed a small storefront, I saw a sign. There was nothing special about the sign; it looked like someone used a Sharpie marker and an index card to make it. It was the sign’s message that was so startling. It was what the sign said that made me drop my guard, leading to my being mugged thirty-six times simultaneously and being run over by two taxis:

For those of you that don’t know, ear candling is what fools with too much money and no knowledge of biology do with their spare time. Ear candling, sometimes called coning, is the process of taking a hollow candle, sticking it into your ear, and lighting it on fire.

Theoretically, this procedure has all sorts of amazing affects. The vacuum created by the burning candle supposedly sucks out earwax, evil spirits, negative energy, and all sort of other bad mumbo jumbo, leading to a whole host of improvements, both physical and psychological, to say nothing of the spiritual ramifications.

In practice, this doesn’t happen. The suction provided by the flame isn’t enough to suck out any earwax; it is, however, a flame that is inching steadily towards your ear canal. More often than not, an ear candling session does not end with the mental and bodily rehabilitation of the patient; it ends with the patient running around screaming that his or her hair is on fire, or that they’ve got a lump of wax lodged inside their ear, or that hot wax dripped down into their brain.
Now maybe I’m just a simpleton, but I cannot understand how anyone could possibly listen to someone say “you should pay me to stuff burning objects into your body’s holes” and thing it’s a good idea. I’d thought ear candling went out with corsets and dueling at twenty paces in terms of insane semi-witchcraft hocus pocus, but apparently it is alive, well, and being practiced in New York City.

Though I’ve not seen in advertised on the trendy streets of New York, biomagnetics is an alternative medicine procedure that’s even more awesome. It’s not the act of getting magnetic material implanted into your body, or even using magnets to “clean” your blood of “toxins.” It’s the psuedoscience that was invented by a man named de la Warr. It seems he had a box that contained vials for holding hair, blood, and… well, other fluids from an ill patient. The operator of the box would then rub his fingers on a piece of plastic attached to the lid of the box. If nothing happened, he would turn a knob that advanced a ticker by one. The first time nothing happens, the ticker is turned from 0 to 1, the second time from 1 to 2, and so on. If the operator’s fingers stick together as he rubs them on the plastic, he checks the number of the ticker, which is between 0 and 999,999. That number could be looked up in a book written by Mr. de la Warr, wherein he lists every number and what disease they correspond to.
Thus, the disease diagnosed, the operator could then operate another box that would cure the patient… somehow. Even if the patient wasn’t there. It could cure the disease of someone on the other side of the world, had the person mailed the appropriate samples to the operator.
Not only could the second box somehow cure diseases that had already occurred, but it could cure diseases that had not yet struck. There’s a story that a man sent Mr. de la Warr some samples; after using the diagnosis box, de la Warr concluded he had tuberculosis and used the second box to cure him. A trip to the hospital revealed no tuberculosis, which means that the machine worked. It completely cured him.

Color therapy is a subject about which I am soon to receive a number of angry emails from psychologists. Let me assure you, I’m not talking about the legitimate form, which is when people decorate their homes or places of work with colors they like, which can be very soothing. The idea being, of course, that if a person isn’t constantly angry that they live in an ugly home, they won’t suffer from the ill effects of anger, such as high blood pressure and an irrational urge to write articles for their university newspaper about the paranormal. No, I mean the illegitimate forms of color therapy, wherein colors are used to treat disease. At one time various quacks claimed that by shining light of a certain color on a patient, it would cure their diseases. Red seems to have been particularly affective against illnesses of the liver and digestive tracts, and so on. Another variant claims that by shining light of a certain color on normal water, the water will transmute into an effective medicine. Neither of these are based on fact, with the exception being that natural sunlight helps you produce vitamin D that prevents, if I recall, rickets.

The thing that these techniques have in common is that they’ve never been tested by scientific methods. Sure, we know that light is just a big bag o’ photons, but no one has ever concluded scientifically that being exposed to them can prevent disease. Compare this to regular medicine, which is rigorously controlled by medical experts.

One alternative medicine that doesn’t fit this bill is Iridology, which is when a ‘specialist’ looks into the eyes of a patient. His ailments will, apparently, be spelled out on his iris, and the Iridologist will be able to diagnose the patient with nothing more than a long glance. In 1988, about 100 years after this technique was invented, a scientific test was held. 39 patients suffering from gall bladder problems (supposedly the easiest to diagnose) and 39 healthy patients were sent to the 5 leading Iridologists. They managed to properly diagnose a little under 50% of the test subjects, which is about the same percentage that I was able to diagnose when I practiced Saucology, the alternative medicine where I was able to diagnose disease based on whether the next buffalo wing I randomly grabbed from a plate was a wing or a drumstick. Which is to say, it’s the same percentage that they would have gotten right had they just guessed, flipped a coin, or said every single patient was diseased. But we’re getting away from the point: I really love buffalo wings.

Obviously, I’m not going to claim that all “alternative medicine” consists of things like ear candling. Yoga, for instance, is considered an alternative medicine if it’s use to treat an ailment and, because it has a very strong “exercise daily and don’t eat garbage all goddamn night” message, it’s sure to lead to some improvements in the health of those who follow it. However, the extreme cases are the most interesting. I hope that after reading this article someone, somewhere, will be faced with the decision of whether or not to buy into some reasonable-sounding miracle cure, and they’ll ask themselves “to what extent does this procedure resemble biomagnetics?” That answer will tell them whether or not they’re facing a snake-oil salesman. I’m certainly not claiming that we should put all of our faith in regular medicine, since both the government and big pharmaceutical companies want only to screw you over. But you face much better odds with them than with the hocus-pocus baloney that, for the most part, is alternative medicine.

This article first published in The Triangle, 26 May 2006