Every family has traditions. Some families have dinner together every evening; some have a game night where they all sit down and play Monopoly until accusations of cheating and sullen sore-losership ruin things. My family was big on TV. I think it was on Tuesday nights that we’d all sit down and watch Rescue 911 followed by Unsolved Mysteries with Robert Stack, whom you may remember as the guy from Airplane!, the second greatest film of all time (beaten only by Weekend at Bernie’s.)

Anyway, I know now that Unsolved Mysteries is not a show you ought to let small children watch. I spent many sleepless nights wondering at exactly what moment ghosts would come shooting out of my closet, or aliens would abduct me through the ceiling of my room, or when some faceless thug would murder me and make good his escape.

Though I don’t remember the episode specifically, I am sure I must have seen the episode that detailed the so-called Allagash Abductions. I’m sure that, at the time, it scared the living daylights out of me. In my best Rod Serling voice, I’d like to ask you to meet four unlucky art students: twin brothers Jack and Jim Weiner, Chuck Rak, and Charlie Foltz. Back in Augut 1976, they decided they’d go on a nice, relaxing fishing trip to the back woods of Maine. Little did they know that they would be part of the most bizarre incidents of UFO history, and I don’t mean the fact that in Maine they sell lobsters at McDonald’s.

In the great tradition of relaxing sport expeditions, one night they made what seems to me a relatively poor choice: they decided to go night fishing. To find their way back to the bank, they made a good-size bonfire from some large logs that would burn well into the night. Hopping into their canoe, they set off onto the lake shortly past sundown.

After a short time, they saw a strange light hovering over some trees perhaps a few hundred yards away. Charlie Foltz, in what I can only describe as ‘something you couldn’t pay me enough to do,’ took a flashlight and started shining it at the object. The huge glowing ball, not to be outdone, moved towards them and lit up their canoe with a bright blue beam of light. The fishermen began rowing like all hell, except for Charlie Foltz, who “wanted to meet the aliens.” This should be lesson enough to ensure that, if you are going on an isolated fishing trip with your friends, you should discuss what to do in the event of being chased down by a UFO because that’s really one situation where you need a united plan everyone agrees on.

One moment, three quarters of the canoe’s crew is paddling like madmen; the next moment, they are sitting on the shore of the lake. Curiously, the bonfire they had lit only a little while before, and which should have burned for hours and hours, was now nothing but smoldering embers. More curiously, the four men were thoroughly uninterested: they just secured their gear and went to sleep. The next day they drove home as though nothing had happened. They all remembered the strange light, but not being chased down by it, and they were uninterested in the fact that they were apparently missing a couple of hours from their night. On the way out, they asked a park ranger about the lights; he replied that they were searchlights.

They lived normal lives until 12 years later, when Jim Weiner had an accident in which he fell about 15 feet and, since the earth has not yet ever lost in the competition of “falling people vs. the Earth,” he received a bad case of epilepsy as a silver medal. After this severe blow to his head, Weiner began having strange, extremely vivid nightmares of being surrounded by monsters doing experiments on his body. He went to his doctors and told them of the research being done by Dr. John Mack at Harvard, who, being a psychologist, believed that every single thing he was being told was true. (I’m not saying that all headshrinkers have this problem, but Mack’s field believed that everything a person said was valuable, since people always have a reason for saying things, even if they are lies. Other than his UFO work, it should be noted, Mack was a pretty good guy.)

Anyway, Weiner’s doctors said something to the effect of “you’re off your rocker” and he decided to take his problems to a different set of experts: he went to a UFO convention and talked to some folks who put him in contact with Anthony Constantino, a high-school English teacher and hypnotist.

Constantino agreed to hypnotize the four men, and in separate 3-hour sessions they all told the same story: that the light was actually a spaceship, which had kidnapped them straight out of their canoe. They were led into a room “like a veterinarian’s office” and subjected to a number of unpleasant medical procedures. They went through the whole alien abduction experience, with which you have probably now become quite aware, if you read this column with any regularity. Sperm was removed, objects inserted, giant insects spoke to them telepathically, so on and so forth.

The aftermath: Jack Weiner’s artwork became fairly odd, focusing on holes burnt in pieces of graph paper. He also developed a large lump on his leg, which he had removed. Supposedly, the pathologist was unable to identify it, and sent it to the Centers for Disease Control; when Jack Weiner went there to see if they’d made any progress in identifying it, he was told that the Department of Defense had, for some reason, come in and confiscated the sample. 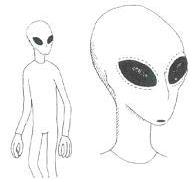 All four men became nationwide celebrities; a book was written of their encounter, they were featured in a full-length comic book version of the incident, they appeared on talk shows including the Joan Rivers show, they have been the men of honor at a variety of UFO conventions and, of course, their story was on Unsolved Mysteries.

I want to make it clear that I’m not writing this in malice. I’m sure all four of these guys are nice people, and I wish them all the luck in the world. However, I think their tale is baloney, and I hope they won’t hold the following explanation against me.

First, the fact that Weiner was aware of the work of John Mack, and that he was the one to bring the possibility of a UFO abduction up to his doctors, shows that he is no uninterested party. He already knew a fair amount about UFOs going into this. And to be entirely frank, if you suddenly recall being abducted by space aliens shortly after receiving a blow to the head, as did Weiner, I’m a lot more than a little suspicious about your story.

Second, all of the evidence was recovered by hypnosis. Some months back I spoke with Dr. David Jacobs, one of the leading voices in the UFO community, and he was quite frank with his opinion on hypnosis: no one is an expert in using it, and it is extremely easy to mess it up. He tells a story about how early in his career, when he was doing a hypnosis session, the person just kept telling him things that he unknowingly told her. Perhaps he said “how many aliens were in the room?” or something: the question tells the person being hypnotized that they should have seen aliens in the room. The exact number is irrelevant, because it already establishes that yes, in fact, aliens are there. Suffice it to say that I don’t trust hypnosis farther than I can throw the hypnotist, and I’ve got skinny arms. Hypnosis provides the only proof that this whole thing occurred, and it is the least reliable method most prone to providing errant results, ever conceived by man.

There’s an episode of Dragnet where Sgt. Friday is investigating a murder, so he goes into a bar and asks all the patrons what happened. They all give him the same story- the exact same story. Friday turns to his partner and says “usually it’s hard to get witnesses to agree on anything, but they’re all telling me the exact same thing, in the exact same words. Something’s not right here.” If the stories were wildly different, I wouldn’t believe them, but there’s another extreme: since they’re exactly, perfectly, 100% the same, I’m mildly suspicious about them.

The fact that the park ranger instantly said searchlights were responsible for the lights is interesting. If he didn’t know there were searchlights in the area, would he have said that? No detail is given in any of the accounts I’ve read, but that’s a minor, fascinating, and suspicion-generating part of the story.

I’m sure you’re asking, “if this abduction never occurred, and the culprit isn’t bad hypnosis, why would they make this story up?” I agree totally. Aside from the nationwide fame, celebrity-status among the UFO community, profit, and increase in the sale of their artwork, they had no reasons to make this whole thing up. I’m not saying they did (I have no proof of that) I’m just saying that they had a lot to gain by doing so.

So what does this case boil down to? A decade after a weird fishing trip, a severe blow to the head makes one of the fishermen suspect he’d been abducted by space aliens. Not just that something weird had happened; he went in believing UFOs were at the heart of it. “Evidence” was then collected by the least reliable method, hypnosis, and the four received some money and a lot of fame. I don’t know what happened that night, but I do know that a story has got to be a lot stronger than what they’ve got to convince me of the existence of space aliens, flying around and kidnapping people.

First published in The Triangle, 20 January 2006